If You Don’t Like Those Rainbow Profile Pictures on Facebook, Conservatives Made an American Flag Version July 1, 2015 Camille Beredjick

That’s because 26 million people have used a Facebook-created image generator to overlay a translucent rainbow flag on their profile pictures. It’s a celebration of Pride month and of the Supreme Court’s ruling in favor of marriage equality. Adorable, right?

Not to the folks at Right Wing News, who think giving basic rights to another group — rights they themselves have always had — is oppressing them. So they created a similar generator that merges your profile photo with an American flag. 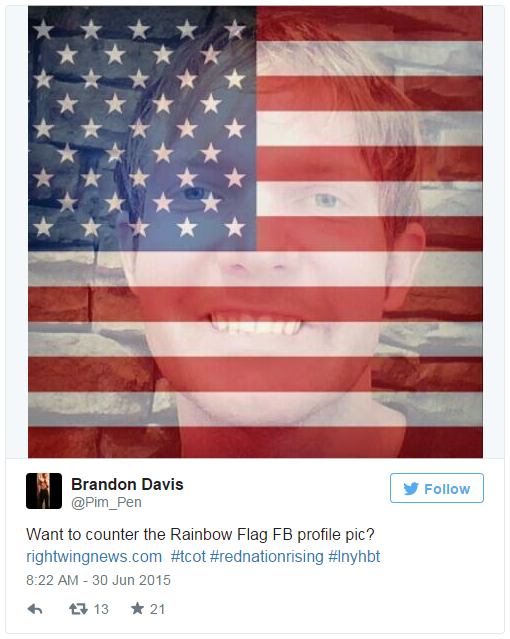 They’re not even pretending the generator isn’t a response to the rainbow flags, either. The main text that conservatives are tweeting in order to spread the word is along these lines:

People are adopting the new backdrop here and there, but not nearly in droves like those with rainbow photos. It’s more like a smattering of people who like Right Wing News on Facebook. Maybe with some more marketing, it’ll catch on. Or maybe they will give up, recognize that they lost this battle and will inevitably lose the war, and make their photos rainbow-licious like the rest of us.

Because using the confederate flag would be a little too on the nose.

Someone had to say it.

July 1, 2015
Josh Duggar May Be Sued by Non-Family Molestation Victim
Next Post