In the wake of the shootings at Emanuel AME Church in South Carolina, you can imagine how other black church leaders across the state might be concerned about their own safety. In fact, the heads of two AME churches in the state have received letters with implied threats of violence. The letters were signed by a self-proclaimed “Apostle Prophet” Harry Leon Fleming (who may or may not exist) and both letters targeted the pastors because they’re women. 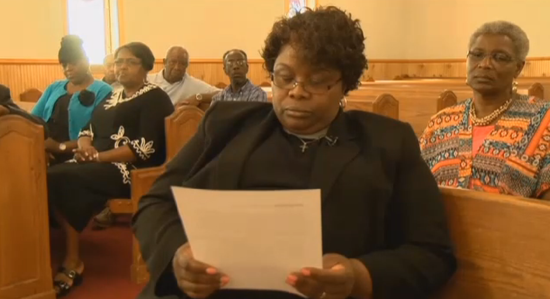 The two pastors received letters where the writer used Bible verses to threaten the women, leaving them concerned about their safety. One letter was left on the front door of Society Hill AME Church on June 10th for Pastor Mary Rhodes. [Above, in picture]

“Whoever wrote this letter has taken the [time] to find out who I am which means you may know my children, my grandchildren, and I have no clue who you are” Pastor Rhodes said.

The letters, even if you don’t interpret them as threats, are clearly using the Bible to instill fear in these church leaders. As if someone who disagrees with the theology that women can lead churches is actually going to do something to change that.

As best as I can transcribe it, here’s what the letters said:

As I go into the book of Genesis 3 v 1-6 ,the woman Eve was deceived by the Serpent. See 1 Timothy 2 v 12-15 and Corinthians 14 v 33-38 , because of what Eve did In The Garden. The Lord has suffer all women to come under full submission in the church, home and world. They are commanded to be obedient as also said the law. The woman can not be the head of the man In church, home and the world, 1 Corinthians 11 v 3, Let me put you in remembrance. The bible said That God change not and that is true. The Devil change not, because he is doing the same thing that he did in the beginning with the woman Eve. The Devil always use a woman to bring down a good man. Remember Samson in Judges and David in 2 Samuel , he’s doing the same thing in the churches today.

In the Old Testament , God the Father had 17 major prophets and all of them was men . In the New Testament Jesus had 13 Disciples all was men even Mary his mother and Mary Magdalene where not chosen to be disciples or apostles, because he said I only do what I see my Father do, John 5 v 19. Then you are to do the same thing you see Jesus do , to follow in his foot steps.
The book of Joel 2 v 28-29 and Acts 2 v 17 said the Llord will pour out his spirit . What he is saying ,That we want his people to go out in the world , in the street ,highways and the world to prophesy the gospel to all the people outside off our church. Members come to our church to learn the gospel as a disciple and take what they learned to the streets to reach the people in Prophesing as he pour out his sprit on them. The Lord has set his house in order and left his servant in charge of it. The Lord went on a long journey but know he’s back and the church is’nt ready for him, therefore he must set things in order, are the blood of the people will be on your hand , and the women must repent and turn away from what you are doing in the church, home and the world are you and your children will die. Revelation 2 v 20 -23 Come under full submission are you will not be save in child bearing. 1 Timothy 2 v15 woman can not be a pastor in a church or sheperd over God’s people.

To their credit, local authorities are taking these threats seriously and doing what they can to find the writer.

“The Clarendon County Sheriff’s Office is continuing their quest in attempt to locate the person or persons responsible for distributing the letters and will have deputies posted at every church that received the letter,” [Sheriff Randy] Garrett said in a statement. “The citizens of Clarendon County will be able to worship in peace…”

Here’s hoping no harm comes to those churches. Like Garrett said, people should be able to worship in peace and this sort of letter — no matter how you describe it — gets in the way of that. You shouldn’t have to look over your shoulder in order to do your job.