The city of Casselberry, Florida offers local families a summer camp for children. It sounds like a good time. They even have “Friday Fun Days,” where they go off-site on a field trip.

But one of those Fridays was going to be spent in partnership with a local church, and that’s where a line was crossed.

It didn’t go well when they did it last year:

When [Pastor Andy] Searles partnered with Camp Casselberry in 2014, his message to campers reportedly was to be good at three aspects of life — physical, mental, and spiritual. Searles allegedly likened being “spiritually good” to being “scripturally good.”

Is there any reason to doubt he’d do the same thing again?

For that reason, the Freedom From Religion Foundation sent a letter to city officials last week calling on them to cut ties with the church for this event:

“Our concern is that Mr. Searles and church volunteers will take this opportunity to again proselytize Camp Casselberry campers,” wrote FFRF Staff Attorney Andrew Seidel in a June 24 letter.

Since the event was city-sponsored, “paid or not, Mr. Searles and the church volunteers are bound by the First Amendment like any other government employee and must remain neutral toward religion during their participation in Camp Casselberry,” said Seidel. “Additionally, the city would be liable for their constitutional violations if they fail to remain neutral towards religion during their participation in this event.”

Perhaps knowing how this would end, the church and city did the right thing and went their separate ways. It must have left a bad taste in the church’s mouth, though, because they put this message in their recent newsletter: 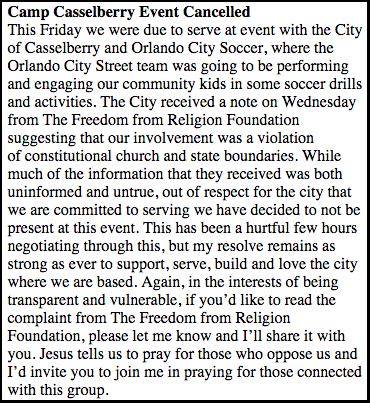 The City received a note on Wednesday from The Freedom from Religion Foundation suggesting that our involvement was a violation of constitutional church and state boundaries. While much of the information that they received was both uninformed and untrue, out of respect for the city that we are committed to serving we have decided to not be present at this event… Jesus tells us to pray for those who oppose us and I’d invite you to join me in praying for those connected with this group.

How’s that for denying any wrongdoing? They were pretty much wrong about everything. We won’t go into detail, but we’re gonna comply with their wishes anyway because we’re awesome like that.

FFRF’s response was to just shrug it off:

“They can pray for us all they want, so long as they don’t force that prayer on other people’s children,” commented Seidel.

In any case, crisis averted. Good for the resident(s) who alerted FFRF to the violation.

July 1, 2015
Ken Ham's Lawyers Still Think Kentucky Officials Are Persecuting Them Because of Their Christian Faith
Next Post

July 1, 2015 Tennessee Store Owner with "No Gays Allowed" Sign Backtracks a Little Bit
Browse Our Archives
What Are Your Thoughts?leave a comment