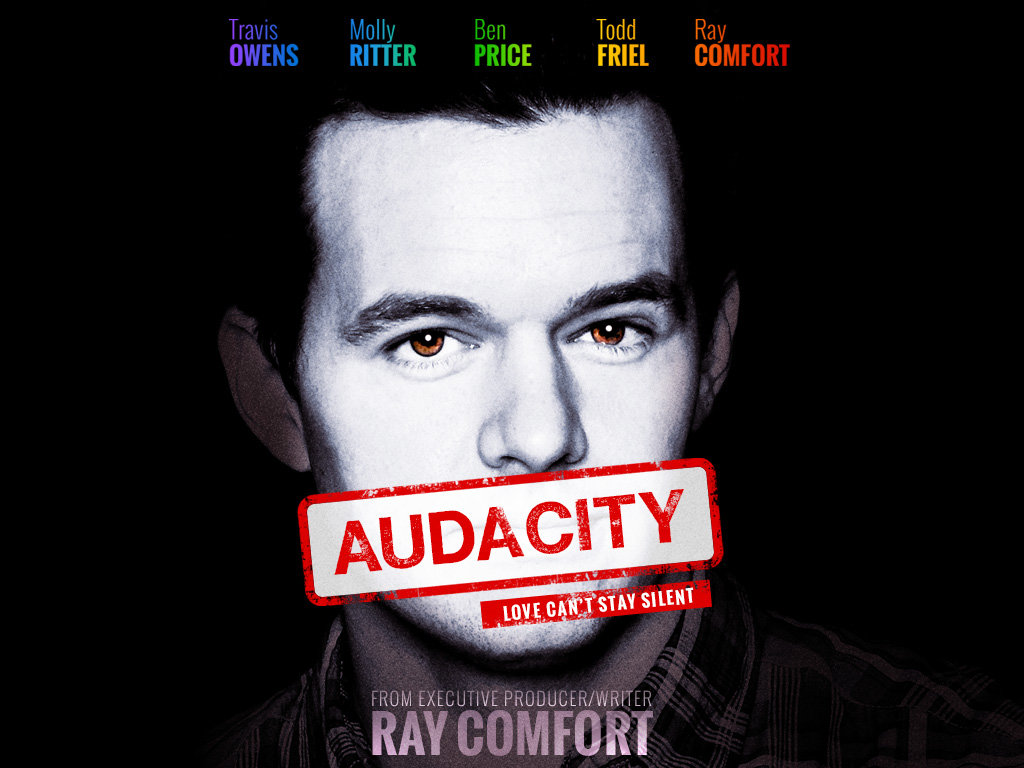 See the guy in that poster?

That’s the film’s star, Travis Owens. His character, Peter, is a Bible-thumping Christian who wants to save everyone from the “dangers” of homosexuality.

Which is why it’s rather interesting that Owens retweeted some pretty pro-LGBT messages on Friday after the Supreme Court’s decision: 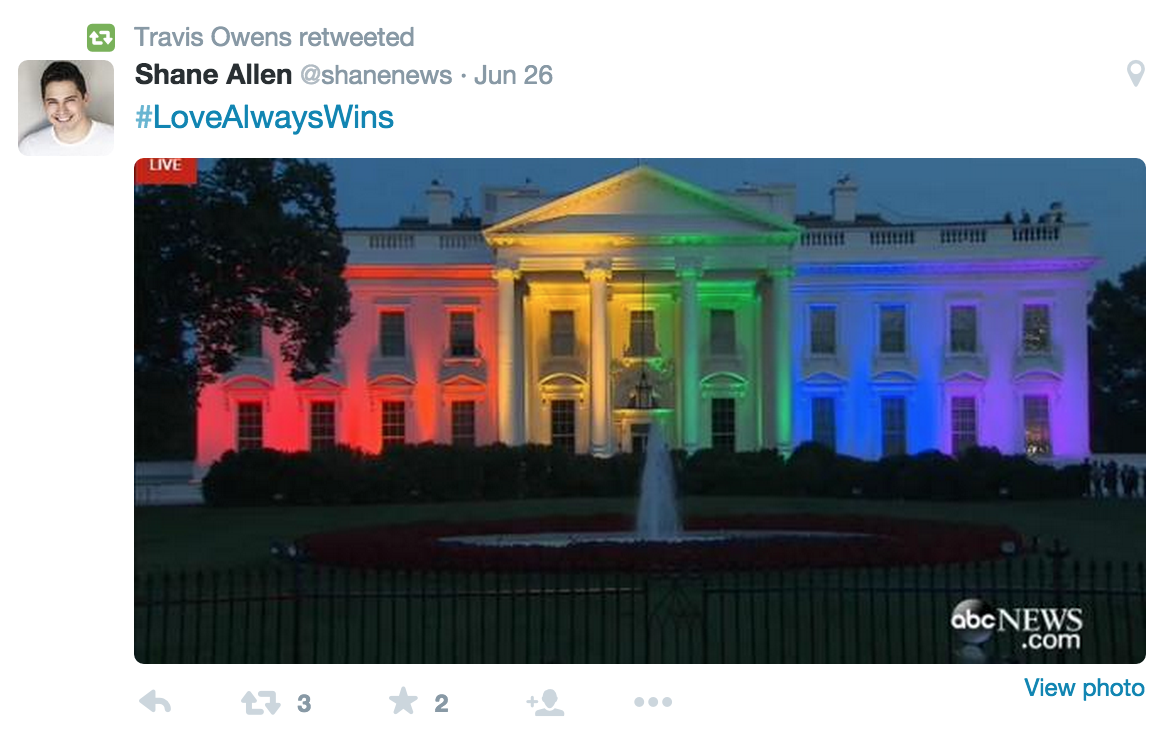 And see this screenshot from the film? 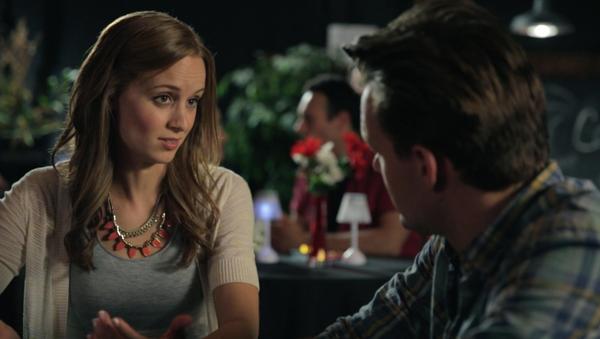 That’s Owens’ co-star Molly Ritter. She plays Diana, a lesbian who initially yells at Peter for being so homophobic but eventually sees the errors of her ways.

And this is from Ritter’s Twitter feed on Friday:

So both of the stars of Comfort’s anti-gay film are supportive of LGBT rights.

That’s hilarious… and also a bit strange. Makes you wonder why they’d participate in a project like this. Did they know what they were getting into?

Yesterday, I reached out to Travis Owens to ask him about his participation in the project, and he was kind enough to answer my questions.

He explained that his manager suggested him for the role, and the audition was no different than anything else you might see in Hollywood. He was asked to do some improvisation and read some lines in front of Comfort and other producers. At no point did they discuss his personal beliefs; they were irrelevant.

(Right there, you have to wonder what was going through Comfort’s mind. If he wanted to make a high-quality film with real actors, he had to know he would run into LGBT people or supporters. Did he just not care if the actors in his film disagreed with the message of it? I’ve asked him for comment on that and will update this post if/when I hear back.)

Anyway, back to Owens. Was he fully aware of what this movie was about when he got cast?

I didn’t get the entire script until right before shooting, if I remember correctly. I knew it was a faith-based film in the beginning. I’m not religious at all, but the idea of me playing a Christian piqued my interest.

After he read the script, why go through with it, knowing it was against gay rights?

This is where it helps to put yourself in his shoes. Owens told me he had auditioned for several roles before. A couple of times, he made to the final stages of the casting process before losing parts to bigger-name stars. When you’re trying to get your big break, and someone offers you the lead role in a movie, it’s hard to say no, subject matter be damned. You’re playing a character, after all, and portraying someone who’s nothing like you in real life isn’t just a neat challenge, it’s a chance to showcase your acting chops for producers who may want to cast you in their future projects.

I had doubts about doing the film. But as an artist seeing a role that I was challenged by, that I was SO opposite of, I wanted to sink my teeth into it and find out what I was made of.

I went to my brother, sister, and best friend who are gay and are constantly getting updates on my career and the difficulties of the rarity of opportunities within it. They all adamantly agreed that I should do it.

I can’t say I blame him. Getting cast in a lead role, for a film that has a lot of marketing behind it, is a *huge* break. I mean, his face is on the poster. You can argue he’s a hypocrite, and you would never do such a thing… but unless you’re a working actor who’s faced plenty of rejection (as all actors do), that criticism doesn’t really carry much weight.

Owens also said he wasn’t entirely aware of what the final product would look like — suggesting he didn’t know about the segments with Ray Comfort conducting on-the-street interviews — but that’s typical of how movies work. The actors play their roles and the final cut is really up to the director and producers. The edits are in their hands. Owens had a job to do, he did it, and then he was done.

I asked him what sort of reaction he was getting from friends who may wonder why he participated in the film:

They understand who I am and what I stand for. They also understand how I challenge myself and don’t get complacent as an artist. Strangers see it one way with limited information and I understand. Before the release, gay men came to me and sent some personal and pointed tweets. After the release, when I started tweeting for #LoveWins, Christians found out I wasn’t religious and didn’t believe my character’s message and were “disappointed.” Lose, lose situation, as far as reaction, but one I expected.

So there you go. It was a job, it was a good role, and it doesn’t take away from the fact that Owens and his co-star will continue to support LGBT rights.

I also reached out to Molly Ritter to get her take on the situation, but I haven’t heard back from her as of this writing.

***Update***: Ray Comfort has responded to my questions.

I asked him if he was aware of the actors’ views on LGBT rights before filming:

We were looking for good actors. That was the criteria, rather then what they believed. Often Christians like to “keep it in the family,” but years ago I learned that isn’t always a good idea. I went to a dentist because he was a friend rather than because of his ability, and it was a painful mistake. We were aware that even a few seconds of bad acting is very painful, and so we chose the actors solely by merit. Travis and Molly are both excellent actors and wonderful people. They are also extremely professional, and we really enjoyed working with them and getting to know them. What they believe is their business. In America we have the freedom to have differing convictions and still get along. That’s healthy.

I also asked him if their views detracted at all from his film?

Whether it distracts or not is really irrelevant to us. Hiring actors on the basis of their merit is the right thing to do. We are tolerant and accepting of those who don’t believe as we do. This is something that is also evident in the movie. Those who call this an anti-gay film either haven’t seen it, or didn’t pay close attention.

I asked a committed atheist friend to come to a special viewing at a theater in Anaheim here in California. Mike is outspoken in his convictions (he’s even heckled me publicly), but after seeing the movie he gave me permission to use this quote: “Audacity is entertaining and has some great comedy and dramatic tension. Unlike most Christian films it is far from cheesy, and has a great, well-acted script. Most of all it is not heavy-handed, showing the Christian position on homosexuality without being intimidating or angry. Well done!” Michael S. Martin

(Thanks to Jeremy Hooper for the tip)