Oklahoma officials decided to put a Ten Commandments monument on Capitol grounds in 2012 and it’s been a lightning rod for controversy ever since.

In 2013, the Satanic Temple made worldwide headlines when it requested its own monument on the property:

A Hindu group made a similar request.

And then, the week before Christmas that year, the Oklahoma Capitol Preservation Commission in charge of giving the green lights to monuments, declared a moratorium on all monuments.

Their reason was that they were still dealing with the ACLU’s challenge to the original Ten Commandments monument and until they could figure out if that one was legal, they couldn’t really approve or deny any additional ones.

That lawsuit concerned the fact that the monument violated the Oklahoma state constitution which says that taxpayer money cannot be used, directly or indirectly, to endorse religion.

(As this was going on, American Atheists filed a separate lawsuit alleging that the monument violated the rights of atheists. That lawsuit was dismissed this past March.)

Over the past few months, we’ve seen the destruction of the monument by a bipolar Christian man was off his medication (the monument has since been replaced)… 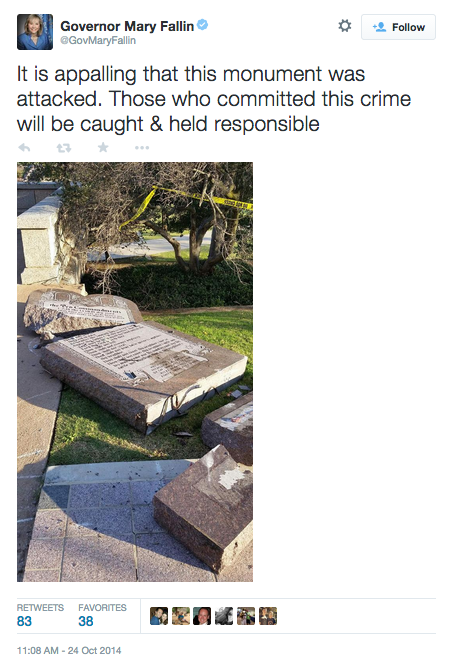 … and the Satanic Temple announced plans to unveil the Baphomet statue in Detroit this summer.

But they may not get a chance to place it on the Capitol Grounds after all because the Oklahoma Supreme Court ruled this morning that the ACLU was right all along and the monument is indeed unconstitutional:

Because the monument operates for the use, benefit or support of a sect or system of religion, it violates the Oklahoma Constitution, the five-page opinion said.

The ruling is very clear about what the law says and how obviously this monument violates it:

The text of Article 2, Section 5 [of the State Constitution]…:

The plain intent of Article 2, Section 5 is to ban State Government, its officials, and its subdivisions from using public money or property for the benefit of any religious purpose. Use of the words “no,” “ever,” and “any” reflects the broad and expansive reach of the ban.

As concerns the “historic purpose” justification, the Ten Commandments are obviously religious in nature and are an integral part of the Jewish and Christian faiths.

In other words, what the hell were you all thinking putting this monument up in the first place?!

The Justices made clear that, unlike a previous Supreme Court case, this wasn’t about whether Oklahoma’s monument violated the First Amendment. It violated the state’s Constitution, and that’s all that matters.

The replacement monument will now have to be removed. The Satanic Temple’s Baphomet monument will have to find a new home. And the atheists who fought to take it down, while directly unsuccessful, were ultimately victorious.

Stand by for whining from state officials who think their job is to promote Christianity.

***Update***: We spoke with The Satanic Temple to hear their plans for the Baphomet monument.

***Update 2***: American Atheists, despite having their own case tossed out, released this statement:

“This is a victory for anyone who values religious neutrality from their government,” said American Atheists President David Silverman. “The Ten Commandments have no place in government. They are incompatible with the protections of our Constitution and, as the Court rightly said, are obviously religious.”

“These monuments are unconstitutional, plain and simple. There is no question,” said Amanda Knief, National Legal and Public Policy Director of American Atheists. “We will fight any attempt to use government resources to advance religion, whether it’s happening in Oklahoma City or Washington, D.C.”

Added Silverman, “This is another example of Christian legislators thinking that their religion is somehow special. It isn’t. The Ten Commandments aren’t any more relevant than the statue of Baphomet proposed by The Satanic Temple. The sooner these lawmakers figure that out, the better.”

“We’re taking on these monuments wherever they are. If governments violate the Constitution, we will to take them to court, and we will win, just as we did in Starke, Florida.”

***Update 3***: The Freedom From Religion Foundation released this statement:

“This decision ensures ‘Thou shalt honor thy First Amendment’ and the constitutional separation of state and church,” said FFRF Co-President Annie Laurie Gaylor.

FFRF congratulations the ACLU of Oklahoma and its plaintiffs for its strong defense of America’s secular principles.