The Daily Beast‘s Nancy A. Youssef has a great profile of Ismail Mohammed, a Middle Eastern atheist whose uses YouTube to convince viewers to join him down a non-religious path: 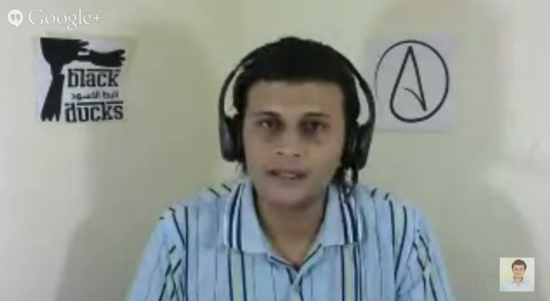 Mohammed, 30, left Islam three years ago but he has become evangelical about his new faith. He created his YouTube channel, Black Ducks, in his Cairo home with no more than a computer, speakers and a simple 8 ½ by 11 piece of paper displaying the show’s logo. For an hour, Muslims across the region spend an hour with Mohammed describing why they left Islam and how the navigate a region where religion is seeped in every pore.

“There are people who believe I left Islam so I must be killed. But maybe if more and more atheists speak up, there will be less pressure and threats,” Mohammed told The Daily Beast.

“I know it is very dangerous. I am not afraid of the government. The biggest danger comes from the society. Sometimes I face problems on the street. Some people hit me in the street when they recognize me from the show,” he said.

Considering he’s still living in Cairo, what he’s doing is incredibly courageous. No doubt he’s a beacon of hope for so many other atheists in the Middle East who are rightfully afraid to speak out.

June 29, 2015
Disproving Gods with History and Science
Next Post