During an interview that took place before Friday’s Supreme Court decision but aired this morning, CNN’s Jake Tapper asked GOP Presidential candidate Donald Trump what he would say to gay and lesbian couples who think of him as a hypocrite for being married multiple times while claiming to advocate for traditional marriage: 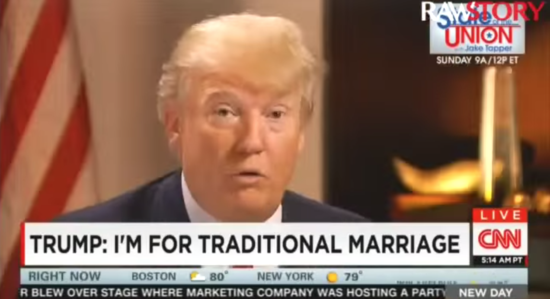 Trump’s response: “They have a very good point,” followed by an explanation of how he’s a hard worker. As if that’s a logical follow-up…

And then there was this:

“I really don’t say anything [to them]. I’m just, Jake, I’m for traditional marriage.”

You know, if Trump just admitted he would shut up in that situation, it may be the first intelligent thing he’s said during the campaign.