Only a few more months until Stephen Colbert is back on the air. In the meantime, we’ll just have to settle for some short videos, like this one reacting to the Supreme Court’s gay marriage ruling: 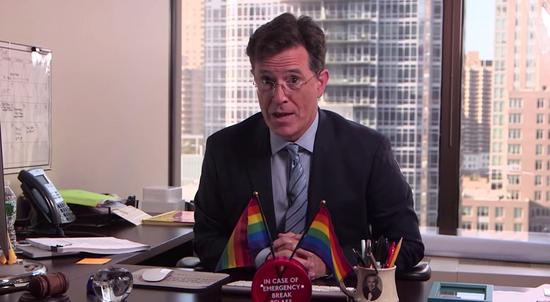 June 27, 2015
A Southern Christian Asks for Forgiveness at a Gay Pride Festival
Next Post

June 28, 2015 Unvaccinated Child in Spain Dies from Diphtheria
"Yes, all true. But you didn't mention the one real reason they object to Mr. ..."
RAM Right-Wing Host Slams Morgan Freeman’s Pro-Vaccine ..."
"You know what I think? This is his way of trying to save face after ..."
Nomad Jerry Falwell, Jr. is Urging People ..."
"That's exactly what I was taught in school 70 years ago. Nobody has tried teaching ..."
se habla espol David and Tim Barton Predicted Christians Wouldn’t ..."
"Okay, I misremembered the details, but yes, they still tried to pull the "creepy Joe" ..."
CanuckAmuck Right-Wing Host Slams Morgan Freeman’s Pro-Vaccine ..."
Browse Our Archives
What Are Your Thoughts?leave a comment