About President Obama’s Speech in Charleston…

If you didn’t watch it yet, take the time to do it now (transcript here): 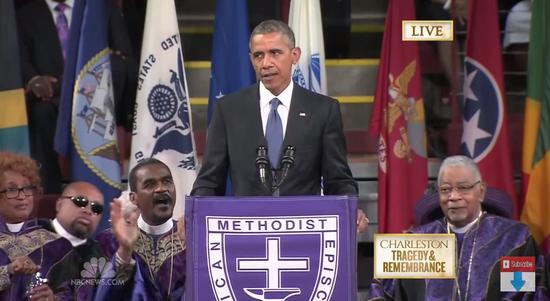 I thought President Obama‘s eulogy of Rev. Clementa Pinckney was just beautiful. It was full of religious rhetoric, sure, but it was heartfelt and a testament to the people in that church (spoken in their language). You don’t have to embrace the religion to appreciate what Obama was saying about forgiveness, making the most of our lives, and fixing our nation’s problems. You can support church/state separation and see the value in his speech.

It’s the sort of religion-in-politics that’s hard to get mad about. Faith wasn’t used by Obama as a cudgel against people who disagreed with him, but rather as a foundational basis to move forward and become better versions of ourselves. We don’t need religion to do that, of course, but I would hope even atheists could see beyond that and take in the eulogy without clenched teeth.

June 27, 2015
After a Long Struggle for LGBT Rights, Enjoy This Front Page
Next Post

June 27, 2015 The Sadness of Bryan Fischer
"Historically, new religions start with good intentions, and go quickly south when money, power and ..."
RAM WA Judge Permanently Blocks Church from ..."
":-( The poor baby darling. Thundershirt? I have one to try on my anxious pup. ..."
Kaia Rose Listen to These Two Horrible Christian ..."
"Hey, he's only following in a long and universal religious tradition."
Brian Shanahan “Pastor” Who Defrauded People Out of ..."
"Been scouring Charity (Thrift) shops in our local UK High Street for vintage pottery for ..."
Jennny “Pastor” Who Defrauded People Out of ..."
Browse Our Archives
What Are Your Thoughts?leave a comment