Teacher Sued After Punishing Second-Grader for Being an Atheist June 26, 2015 Hemant Mehta

Teacher Sued After Punishing Second-Grader for Being an Atheist

How awful of a teacher do you have to be to tell a child there’s something wrong with him because he’s an atheist? 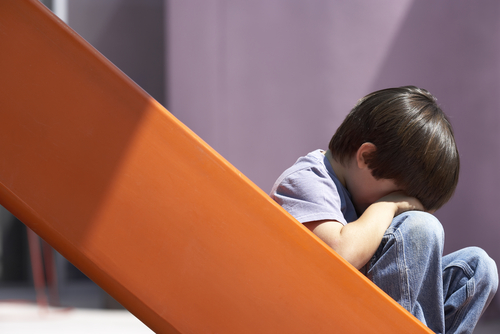 Earlier this year at Forest Park Elementary School in Fort Wayne, Indiana, a second-grader known only as A.B. was asked by his classmate where he went to church:

A.B. responded by stating that he did not go to church and did not believe in God. He also stated that it was fine with him if his inquiring classmate believed in God.

Good answers, but they upset the girl who asked him and she began to cry. Eventually, their teacher Michelle Meyer stepped in to find out what happened and it resulted in her punishing A.B.!

Ms. Meyer told A.B. that she was very concerned about what he had done and that she was going to contact his mother — although she never did.

This was very upsetting to A.B. as he was made to feel that he had done something wrong.

It got worse after that:

On the day of the incident and for an additional two days thereafter, Ms. Meyer required that A.B. sit by himself during lunch and told him he should not talk to the other students and stated that this was because he had offended them. This served to reinforce A.B.’s feeling that he had committed some transgression that justified his exclusion.

All this because he dared to answer a question honestly.

A.B. told his mother, V.S., why he was upset and it resulted in a conference call between her, Meyer, and the school’s Assistant Principal. This seemed to resolve the issue at hand, but the damage was already done:

[The call took place] after A.B. had been publicly separated from his classmates and informed that he could not speak to them. All the students in his class heard and were aware of this. He was publicly shamed and made to feel that his personal beliefs were terribly wrong.

No efforts were made to correct the damages that had been done.

A.B. came home from school on multiple occasions crying saying that he knows that everyone at school — teachers and students — hate him.

Even now there are some classmates who will not talk to A.B.

Even now A.B. remains anxious and fearful about school, which is completely contrary to how he felt before this incident.

Ugh… how horrible. I just want to find this kid, and give him a great big hug, and let him know things will get better eventually.

All of this information comes from a lawsuit V.S. filed last week against Meyer. (Not against the District, by the way. Just the teacher alone — which is unusual but fair in this situation since the District didn’t do anything wrong.) The ACLU is helping V.S. with the case.

This is what it’s like to be an atheist in a conservative area.

The laws may protect you, but the social stigma of being an atheist can be extremely harsh, especially when you’re a child growing up without religious indoctrination.

I’m not sure if the lawsuit itself has merit — it’s not like Meyer was trying to ruin this kid’s life — but the story alone speaks volumes about how tough it can be to be an open atheist in certain parts of the country.

June 26, 2015
Bristol Palin, Abstinence Advocate, is Having Another Out-of-Wedlock Child
Next Post