During the graduation ceremony of the Army’s Air Assault School at Fort Campbell (Kentucky), it appears that officials asked everyone to bow their heads and say a Christian prayer: 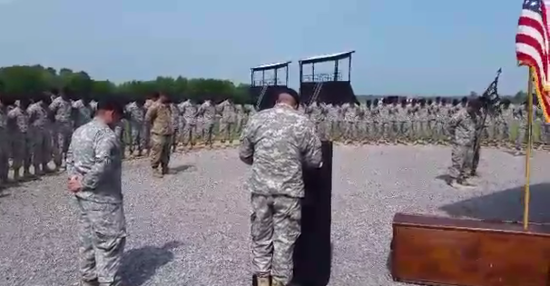 The Military Association of Atheists and Freethinkers is appalled by this (emphasis theirs):

This prayer goes far beyond something simply ceremonial, non-denominational, and optional. This is Christian-specific, mandatory, and requires participation, and hopefully Christians will stand up against such bad leadership as readily as non-Christians.

… Because the school is so important and just 11 days with a high attrition rate, there is little opportunity for trainees to speak up. Commanders and chaplains seem to feel free to enforce their beliefs on vulnerable trainees. Christians should feel free to pray in their free time and during worship services, but they should not be given captive audiences of military trainees upon which to enforce their beliefs.

While MAAF isn’t making a more formal fuss over it yet, the military’s default Christianity is evident. Pressuring soldiers to participate in a prayer, especially in a place where leaders are to be obeyed, takes advantage of those who may be afraid to speak up. You may think it’s benign, but it’s part of a broader, dangerous pattern within our military where Christianity is just assumed and ubiquitous. Military leaders are welcome to pray privately. They have no right, though, to make everyone else come along for the ride.

June 26, 2015 No, That's the Least Offensive Part About the Confederate Flag
"ROFL ok I have THAT faith in them, most certainly"
ilr1950 The White House Faith Office Met ..."
"They have a model: Franco's "National-Catholicism". Stayed in power for more than 40yrs. and poisoned ..."
CorporalKlinger This Group Uses Christianity as Justification ..."
"And still they wield a lot of power in a lot of states, and power ..."
CorporalKlinger This Group Uses Christianity as Justification ..."
"To each his/her own."
Die Anyway Anti-Racism Activist Rev. Rob Lee IV ..."
Browse Our Archives
What Are Your Thoughts?leave a comment