U.S. Air Force Officials Reminded of Flag-Folding Methods, One of Which is Full of Christian Symbolism June 25, 2015 Hemant Mehta

U.S. Air Force Officials Reminded of Flag-Folding Methods, One of Which is Full of Christian Symbolism

Commander’s Call Topics is an email publication going out to high-ranking Air Force personnel, and a recent issue reminded them of the symbolism behind two different flag-folding ceremonies. One of them was non-religious but the other one — which can be used at “personal ceremonies as long as the participants are volunteers” — is explicitly Christian: 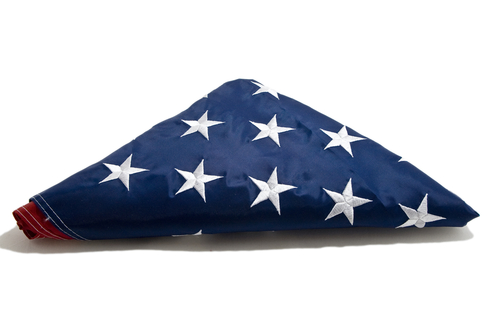 The first fold of our flag is a symbol of life.

The second symbolizes our belief in eternal life.

The third is made in honor and remembrance of the veteran departing our ranks.

The fourth represents our weaker nature; as American citizens trusting in God, it is to Him we turn in times of peace, as well as in times of war.

The fifth fold is a tribute to our country. In the words of Stephen Decatur, “Our country, in dealing with other countries, may she always be right, but it is still our country, right or wrong.”

The sixth fold is for where our hearts lie. It is with our heart that we pledge allegiance to the flag.

The seventh fold is a tribute to our armed forces.

The eighth fold is a tribute to the one who entered into the valley of the shadow of death, that we might see the light of day, and to honor our mother, for whom it flies on Mother’s Day.

The ninth fold is a tribute to womanhood, for it has been through their faith, love, loyalty and devotion that the characters of the men and women who have made this country great have been molded.

The 10th fold is a tribute to fathers who have given their sons and daughters for the defense of our country.

The 11th fold, in the eyes of Hebrew citizens, represents the lower portion of the seal of King David and King Solomon and glorifies, in their eyes, the God of Abraham, Isaac and Jacob.

The 12th fold, in the eyes of a Christian citizen, represents an emblem of eternity and glorifies, in their eyes, God the Father, the Son and Holy Spirit. When the flag is completely folded, the stars are uppermost, reminding us of our national motto, “In God We Trust.”

Why is the government suggesting this particular method of flag-folding? Since when is it their job to inform everyone how a religious ceremony works?

By using official government communications to suggest the use of a religious ceremony that promotes advances religious beliefs, and by associating the American flag with these beliefs, the Air Force violates the basic rules of the Establishment Clause, which forbid the government from taking any action that communicates “endorsement of religion.”

… There is no ceremony for Muslims, or Buddhists, or Hindus, or Wiccans, or those who practice any other faith. Those who serve our country in the Armed Forces have diverse beliefs about religion, and the Air Force may not promote some of those beliefs at the expense of others.

It’s a request that only requires a simple “Sorry, we won’t do it again” to avoid further problems. Members of the military are welcome to use this method privately, obviously, but the government has no business teaching everyone how to be Christian.

It’s just another example of the implicit bias favoring people of (the right) faith within the military.

June 26, 2015 The Ever-Changing Definition of "Traditional Marriage"
Browse Our Archives
What Are Your Thoughts?leave a comment