Giver of all wisdom Pat Robertson was asked on The 700 Club about how a woman should respond to her new Wiccan neighbors. Should they be friends? Should she allow her son to befriend their daughter?

Robertson, as expected, responded with the love of Christ: By telling the woman to avoid them at all costs before they ruin her family. 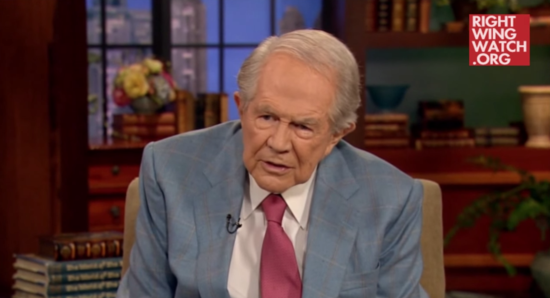 They’ll corrupt you. You know, these people… they say, these are white witches versus black witches. There’s no such thing as “good witch.” It’s all demonic and you don’t want your children involved in that stuff. I mean, they have power. Don’t think it’s not real. It is real. But it’s real wrong. And I would just say you’re not permitted to go to their houses or have anything to do with them. They may seem to be very pleasant people and all that, but they’ll destroy your children and you have to protect them.

It’s just like the Bible says: Love your neighbor as yourself… unless they’re different from you, in which case they’re pure evil and you must convert them before they destroy you.

June 25, 2015 Is the "Relentlessly Gay" Yard a Giant Hoax?
Browse Our Archives
What Are Your Thoughts?leave a comment