Is the “Relentlessly Gay” Yard a Giant Hoax?

Last week, we all heard about the colorful solar lamps in Julie Baker‘s yard spelling out the words “Love” and “Ohana” (the Hawaiian word for “family”). 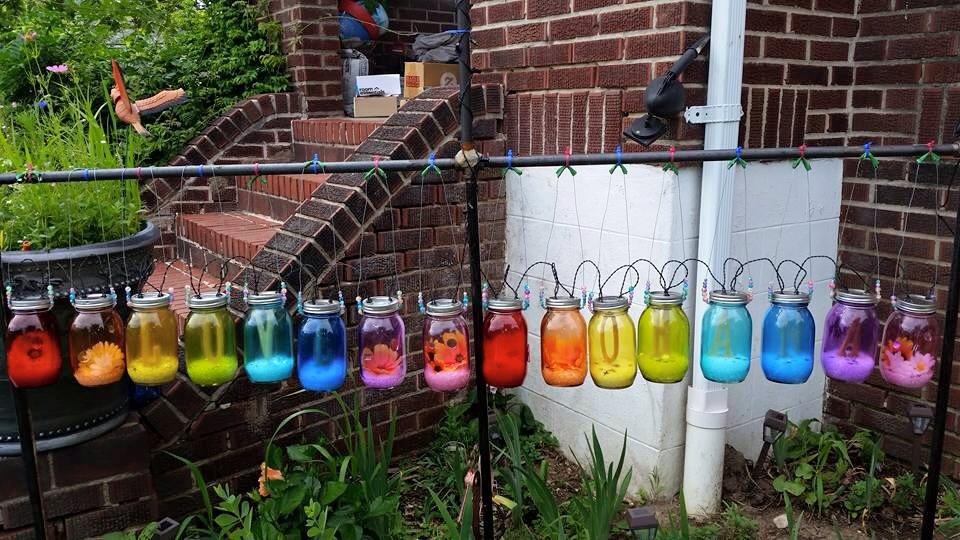 As the story went, one of her neighbors sent Baker a note about how her yard was becoming “Relentlessly Gay” and how that was bad for children. 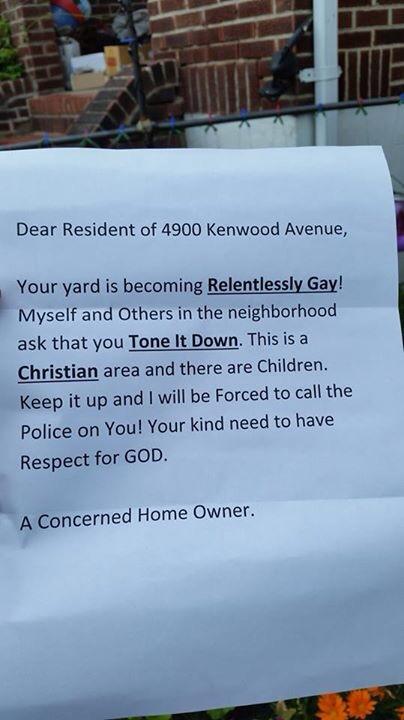 Your yard is becoming Relentlessly Gay! Myself and Others in the neighborhood ask that you Tone It Down. This is a Christian area and there are Children. Keep it up and I will be Forced to call the Police on You. Your kind need to have Respect for GOD.

Baker then set up a fundraising campaign to “make [her] Home even More ‘relentlessly gay'” and the campaign has earned over $43,000 as of this writing.

But now it appears there are a number of holes in the story. As much as I want it to be true, skeptics have to look at the evidence, right?

1) The random capitalizing in the purported-Christian’s letter matches the random capitalization in Baker’s own writing. What’s up with that? Whether it’s her Facebook wall or the GoFundMe page, this is one of those weird writing “tics” where people capitalize words to make them stand out. It’s not like you’re taught to do it that way since it’s improper grammar, so it’s quite the coincidence that Baker and the writer have the same unusual habit…

2) Baker said this wasn’t the first threatening letter she had received since moving into the neighborhood decades ago. The problems began, she said, when she and her husband refused to attend a nearby Presbyterian church, suggesting that the letter-writer(s) might be connected with them. However, the only Presbyterian church near her is one that actually affirms gay marriage. Why would someone who goes to a marriage-equality-supporting church get mad at her for unintentionally promoting the same idea? (It should be said: Baker admitted she had no proof the church was involved.)

3) Baker said she spoke with the police about this incident and to confirm the authenticity of her note, but when someone from Snopes (!) contacted the local police district, a detective offered a very different version of events:

Although Baker had stated the previous day that police were “satisfied” with her claim, the detective to whom we spoke said that Baker was either unwilling or unable to produce the letter in question, and that she had maintained it was no longer in her possession. The detective also indicated that he had attempted to meet with Baker in person the previous day but was unable to do so.

No letter. No meeting. What’s up with that?

Now, in response to these allegations, Baker has paused her GoFundMe campaign. She also wrote this in an update (with weird capitalizations suddenly gone):

On a sadder note, the world is filled with hate and fear, as such I want to work to remove any doubt about the authenticity of the letter. Until then I am not taking a dime out of this account.

It’s worth mentioning that Baker’s story was most prominently called into question by Blake Neff at the Daily Caller, a conservative website. Neff includes additional bits of information he believes point to a hoax (which I don’t find convincing). However, we shouldn’t fall into the trap of dismissing arguments because of their source.

So how can Baker resolve this? On one hand, there’s really nothing she can do. People who are dead-set on saying this is some sort of con aren’t going to change their minds very easily.

On the other hand, there’s plenty Baker can to do to avoid accusations that she’s playing everybody.

She should stick to her plan of not using a dime of the GoFundMe money for now. She wrote that the money was going to go toward making her home even more “relentlessly gay” — rainbow roof and all. Certainly, no paint job like that requires $43,000. So even if she uses the money to rainbow-up her house, I’d like to see any money beyond that donated to some worthwhile LGBT cause.

And I’d like to see evidence that the money is going where she says it is. Transparency for everything.

None of those things require her to give anyone access to her bank account, nor does it reveal any personal information.

Even if the worst case scenario is true and she made everything up, using the money to help others would be an easy way to deflect criticism.

June 25, 2015 Someone Set Fire to Coffee Shop Owned by Jesus-Loving Mayor; Guess Who He Blamed?
Browse Our Archives
What Are Your Thoughts?leave a comment