If We Take Down The Confederate Flag, We Must Also Ban the “Gay Reich” Rainbow One, Says Bryan Fischer June 24, 2015 Camille Beredjick

If We Take Down The Confederate Flag, We Must Also Ban the “Gay Reich” Rainbow One, Says Bryan Fischer

You’ve no doubt heard the current debate about the morality of flying the Confederate flag in the United States, particularly the one on the State House grounds in South Carolina, the state in which Dylann Roof murdered nine people at a historic Black church last week.

As communities mourn those whose lives were taken in Charleston and now tackle the matter of a historically oppressive flag during tragic circumstances, American Family Association pundit Bryan Fischer has the audacity to declare that the rainbow flag is also a symbol of “slavery and oppression” and that it, too, should be taken down. 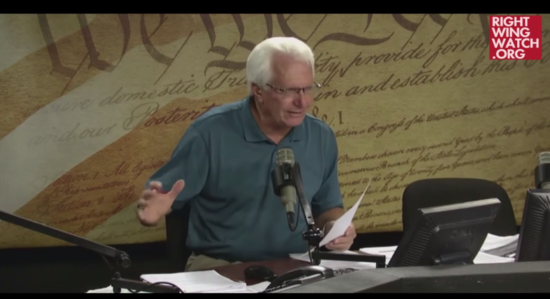 On his radio show, Fischer claimed that the rainbow flag was a symbol of the “Gay Reich,” daring to suggest that the LGBT movement is as violent, dehumanizing, and vile as the white supremacist groups that somehow still exist today. He’s using the tragedy in Charleston to shout his own bigotry from his privileged white rooftop, capitalizing on other’s pain as an opportunity to divert attention from the real crisis and instead talk about why he thinks gay people are gross.

That flag is a symbol of slavery and oppression and bigotry and prejudice and bias. So if we’re going to go after symbols of oppression, we ought to make the rainbow flag the next target for removal in our culture.

Ten seconds of Googling is all it takes to give you a firm understanding of the Confederate flag’s history as a symbol of division and racism, a rallying image for the KKK and other white supremacists. Even some of the top Republicans in the political game are calling for the flag to be taken down. It is an undeniable reminder of America’s racist history, and yet it’s still flown all over the country. And Fischer dares to compare it to a rainbow flag, which at its worst makes conservatives squeamish.

I don’t remember the rainbow flag being used in conjunction with slavery.

I don’t remember the rainbow flag being used by militant hate groups who sought to lynch, burn, and rape people different from them.

I don’t remember the rainbow flag being used by supremacist groups who make it their life’s work to intimidate, endanger, or kill people on the basis of their skin color or their religion.

I don’t remember the rainbow flag being proudly displayed by murderers who state out loud that prejudice incited them to commit a mass murder.

But, of course, the debate about the Confederate flag is about so much more than Dylann Roof. It’s about some people’s unrelenting commitment to an image that is a symbol of Black people’s persecution, abuse, and the murders of their families. Not just the murders that happened decades or years ago, but those that are happening right now.

If Bryan Fischer would be so kind as to provide me with some history of the rainbow flag that I may be missing, though, I’m happy to read up. Otherwise, this is horrifically offensive — to LGBT people whose flag is being compared to those of Nazis, to those Christians who are unlucky enough to have Bryan Fischer speaking for them, and most of all, to the grieving families in Charleston.

Institutional, violent, deadly racism is real. Let’s not trivialize it.

June 24, 2015
Disney May Be Developing a Film About Charles Darwin
Next Post