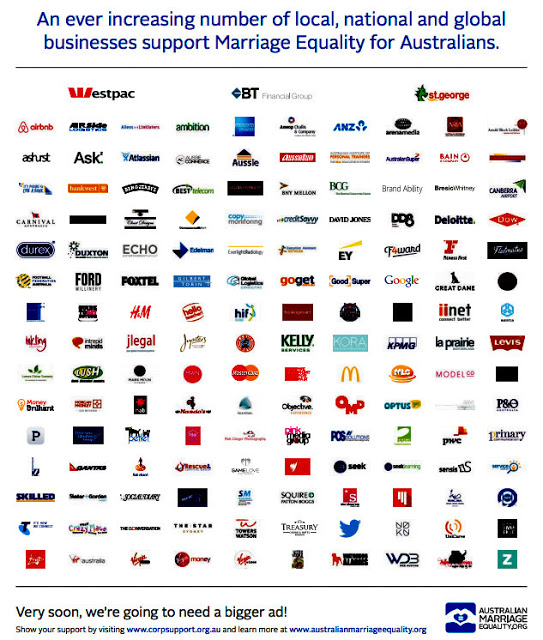 That’s what the Catholic Church’s response in recent days is just a joke:

The Catholic Church in Sydney is sending letters to companies that publicly support same-sex marriage, expressing its “grave concern” about their stance.

“It is… with grave concern that I write to you about the Marriage Equality for Australians campaign,” it reads.

“For corporations to speak on such issues… is indeed overstepping their purpose and it is to be strongly resisted.”

[Major law firm] Maurice Blackburn principal Liberty Sanger said she was not sure what the intention of the letter was, but either way the law firm would not be intimidated.

“Now it may well be that their intention was to try and frighten us into not participating in the debate,” she said.

“If that was the objective, well it’s had… obviously had the opposite effect”…

In short, the companies willing to address the letter at all are just laughing it off, as if anyone gives a damn what the Church has to say on this issue. It’s not like the Church is known for its moral authority now (if ever), so it’s absurd watching them treat these companies like a parent would a naughty child.

Even if these leaders do nothing more than sign their companies’ names to a letter, it sends the signal that they’re progressive, inclusive, tolerant, and you won’t regret giving them your money.

Let’s see the Catholic Church put together a list of the large businesses that want to discriminate against gay people and alienate LGBT allies. Good luck with that.

June 24, 2015
Oklahoma Legislators Are Furious That Students Can't Pray at Athletic Events, Even Though They Can
Next Post

June 24, 2015 Judge Tosses California Lawyer's Ballot Initiative Calling For Mass Execution of All Gays
Browse Our Archives
What Are Your Thoughts?leave a comment