Mike Huckabee: We Don’t Need to Talk About Racism. We Just Need to Bring More People to Jesus

You thought there was a race problem in America?

Silly you. It’s been over for a long time. God solved it.

Just ask GOP Presidential candidate Mike Huckabee, who explained all of this on Fox News Channel this morning: 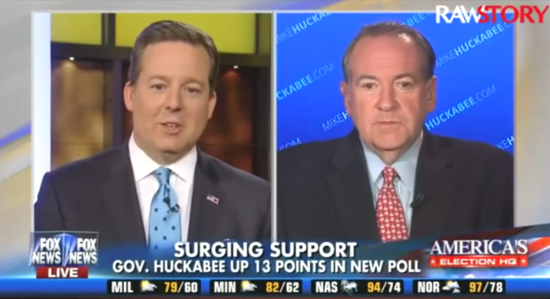 When I love God, and I know that God created other people regardless of their color as much as he made me, I don’t have a problem with racism.

Besides the complete tone-deafness of a white guy saying we don’t have to talk about racism anymore, keep in mind Huckabee is referring to the same God who inspired the Confederacy (motto: “Under God, our Vindicator”).

South Carolina, by the way, is also home to Bob Jones University which, for years, had an interracial dating ban. God didn’t seem to mind racism on that campus.

I guess if we all just start believing in the same God who allowed slavery, racism would finally be over.

Sure, LGBT people would continue being treated like shit, but racism would be a thing of the past!