Dr. Ben Carson Debated Evolution with a “Leading Atheist” and Thinks He Won

Over the weekend, Republican Presidential candidate Dr. Ben Carson spoke to a crowd at the Faith and Freedom Coalition‘s “Road to Majority” conference in Washington D.C. and he referenced an exchange he once had with an unnamed “leading atheist” (3:48 mark): 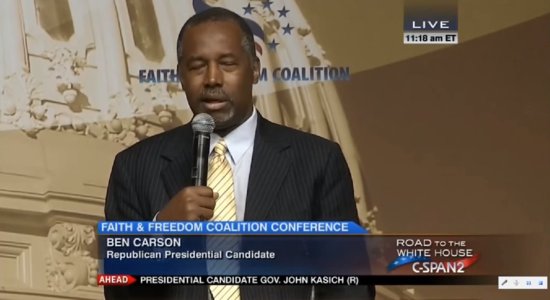 I remember a few years back I was engaged in a debate in Hollywood with a leading atheist. This guy thinks that anybody who believes in God is a total moron. And as we got to the end of the conversation, you know, and he’s denigrating anybody who could believe in Creation, I said, “You know what? You win.”

I said, because, “I believe I came from God, and you believe you came from a monkey, and you’ve convinced me you’re right.”

The crowd laughed like this was the funniest thing in the world… which, to them, it probably is.

But since the brilliant doctor doesn’t get how science works, let me explain it to him:

We didn’t come from monkeys. People who say that are just admitting their ignorance about evolution.

Humans and monkeys have a common ancestor.

Just because we have a common ancestor doesn’t mean we “act” like monkeys in the wild.

Either Carson knows all this and is merely pandering to his base (but I don’t give him that much credit)… or he genuinely believes the bullshit he’s spewing, in which case we should be horrified that he is running to become the leader of the free world.

I don’t need a President who’s a science expert. But it would be nice to have one who defers to credible experts when he or she doesn’t understand something.

Carson, like many Republican candidates, is incapable of that when it comes to matters of science. Perhaps even moreso with him because he is a medical doctor himself. Carson somehow made it to the top of his profession while maintaining ignorance on the fundamentals of his field.