For decades now, Gallup has been asking voters about their dealbreakers when it comes to electing a President:

Every time they’ve asked that question, “atheist” has been at the bottom of the list.

In 2012, there was cause for celebration simply because more than half of those surveyed said they wouldn’t hold atheism against a politician.

Gallup released a new poll today asking the same question and — for the first time ever — “atheist” isn’t the worst trait in a Presidential candidate. 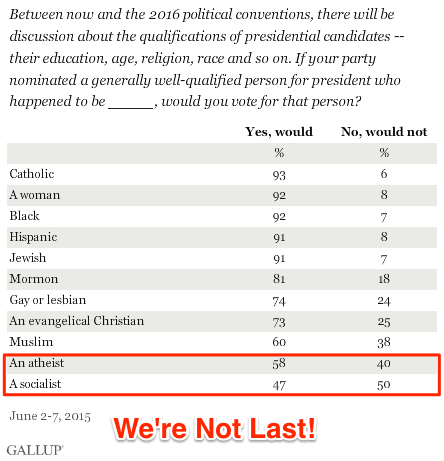 Independent Bernie Sanders, who is seeking the Democratic nomination, is the only Jewish candidate in the race. And while a large majority of Americans are willing to vote for a candidate of his faith, Sanders’ self-identification as a socialist could hurt him, as half of Americans say they would not vote for someone with that background.

Not only is being a Socialist less acceptable than being an atheist, nearly 6 in 10 Americans say they would be comfortable voting for a Godless candidate within their party.

(I mean, it’s not great. We’re still pretty damn low on the list. And we still have no realistic chance at getting an openly atheist candidate in the White House. But… we’re not last!)

The first time Gallup asked this question, in 1958, only 18% of respondents felt comfortable voting for an atheist. (That was the decade when “Under God” was stuck into the Pledge and “In God We Trust” was put on the currency. We were even less popular back then.) 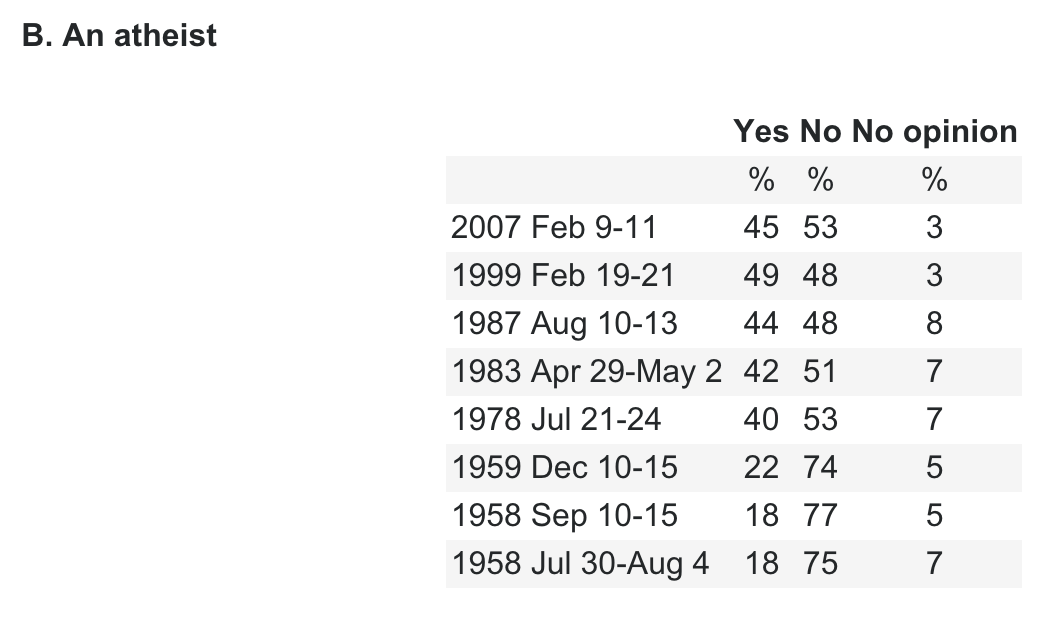 So even though we’re nowhere near the upper echelon of Presidential traits, we’ve made some serious progress. Considering the religiosity of our country and the way just about every politician speaks about the importance of faith, this is a big freaking deal.

When it comes to the traits organizations like Gallup ask Americans about, we’re no longer the least electable group in America.

June 22, 2015
Following Deadly Heat Wave in India, Christian Ministry Sends Radios So Hindus Can Hear All About Jesus
Next Post