Gays Are Setting the World On Fire, According to Janet Porter and Mike Huckabee June 22, 2015 Camille Beredjick

Gays Are Setting the World On Fire, According to Janet Porter and Mike Huckabee

Happy Pride Month, fellow uncontrollable arsonists! May your alternative lifestyle glow with the fire of a thousand blazing freedoms.

I’m paraphrasing Janet Porter, the president of conservative Christian group Faith2Action, in a video excerpt from the anti-LGBT documentary Light Wins. This one in particular is about how LGBT people are ruining the country by supposedly shutting down businesses run by vocal opponents of equality. Mike Huckabee makes an appearance, too. 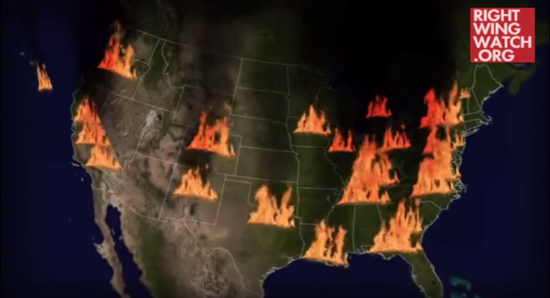 Right now, our freedoms are on fire. The attack against the freedom of speech, freedom of conscious and freedom of religion has come to Main Street, to the business you own and the place where you work.

She’s of course talking about new-ish laws that ban religious discrimination in public businesses. Laws that say bakers can’t refuse to bake wedding cakes for same-sex couples (as if they’re ruining the practice of religion as we know it). In the clip, Huckabee mourns the businesses that can’t remain open because their owners expressed a “Biblical viewpoint” on marriage and even gives a throwback nod to “Chick-fil-A Appreciation Day,” where homophobic Christians expressed their homophobia by gorging on waffle fries.

The video also shows a graphic rendering of the United States literally on fire as the voice-over describes the firemen, bed-and-breakfast owners, printers, politicians, etc. whose careers suffer “when a government mandates public endorsement of sin.”

Huckabee actually brings up Phil Robertson of Duck Dynasty infamy as a case study in the harm of “political correctness”:

Phil Robertson, from the famous and successful show Duck Dynasty, made some comments that, well, they might have been a little on the edge in terms of the manner in which he said them. But they were consistent, again, with Christian beliefs of people all over America and the world. A&E, the network that had made a lot of money off the Robertson family, initially decided to yank them off the air. But the outcry was such they finally had to reverse that decision. In both of these cases, it was a matter of people who are politically correct somehow wanting to tell Christians to just shut up and go away. Jesus told his disciples that they weren’t supposed to shut up and go away.

In case you forget what Phil Robertson actually said in late 2013, it was this:

And then, a couple of months later:

“If you just look at the physiological downside to immorality,” he began, “I mean, a great question to ask is … do you think that it’s a coincidence that all of these debilitating — and, literally, it can cause death — diseases follow that kind of conduct. God says, ‘One woman, one man’ and everybody says, ‘Oh that’s old hat. That’s that old Bible stuff.’ And I’m thinking, ‘Well, let’s see now, a clean, disease-free guy and a disease-free woman they marry and they keep their sex between the two of them, they’re not gonna get chlamydia and gonorrhea and syphilis and AIDS.’ It’s safe. Now, to me, either it’s the wildest coincidence ever that horrible diseases follow immoral conduct or it’s God saying there’s a penalty for that kind of conduct. I’m leaning towards there’s a penalty toward it.

“So, you read in the Bible, ‘One man, one woman.’ Any logical person would say what the guy is saying — that’d be me — is if you want to be safe from a lot of debilitating diseases that’s the route to go and it agrees with what God says. So, it’s just one argument after another, Tony, but what can I say? All you can do is just show ’em that and say, man, people ought to think about this Jesus stuff.”

So, instead of making a case for Christian empathy in exchange for non-believer empathy, Mike Huckabee is affirming that this is actually the most uniform belief among Christians all over the world — that homosexuality is comparable to bestiality and that AIDS is God’s punishment for homosexuality. (He’s still running for President, by the way.)

We’ve reached a point where the Religious Right’s anti-LGBT arguments are downright laughable. They’re still terrified that we’re going to convert their kids to homosexuality (even though that’s a biological impossibility). Yet, with this inane messaging, it seems pretty clear they won’t be converting anyone to their perspective anytime soon.

May the rest of your June burn brightly!