We know President Obama‘s father was non-religious. In a 2006 speech, Obama said that his father “was born Muslim but as an adult became an atheist.” His mother was Agnostic (though Obama once referred to her in Dreams from My Father as a “lonely witness for secular humanism”).

On Friday, comedian Marc Maron interviewed President Obama for his WTF podcast and the episode was released earlier today. If you listen to the show regularly, as I do, you knew religion was going to come up at some point. So I was eagerly awaiting what Obama would say about faith — his own, his parents’, etc. 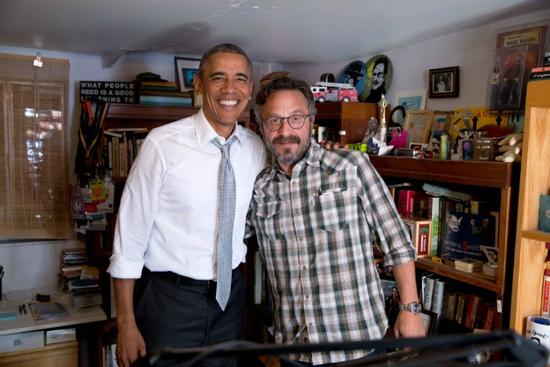 When speaking about his mother, Obama didn’t talk about her atheism, per se, but he brought up her belief that there was something good to be found in all religions (around the 12:00 mark):

Obama: … I always call her — she was the last of the great Secular Humanists. She thought all religions had something to say, and she thought all cultures were fascinating.

Maron: So you weren’t brought up with that, with the religion thing, really, at all.

Obama: No. I mean, we’d go to church for Easter sometimes. But we had a Shinto temple across the street from the apartment where we were living. And when I was in Indonesia, that’s a Muslim country, so you’d have mosques. But she instilled in me these core values that, for a while, I thought were corny. And then, right around 20, you start realizing, you know, honesty, kindness, hard work, responsibility, looking after other people. They’re actually pretty good values. They’re home-spun. They come out of my Kansas roots. But they’re the things that ultimately ended up being most important to me in how I try to build my life.

Alright, so the “last of the great Secular Humanists” line is really a backhanded compliment, as if there are no Humanists anymore who can recognize positive attributes of faith. But I didn’t think of that as a slam on atheists so much as an homage to his mother for seeing the good in everything.

If anything, it could be seen as an endorsement of Humanism. Obama suggested that what mattered most was not what you believed about the afterlife, but how you treat people in this life. That’s basically how most non-religious people live. You do what you can to help others and leave a positive legacy. That matters a lot more than whether or not someone died for your sins.

So give it a few hours, and I’m sure some conservatives will criticize Obama for not explicitly denouncing his mother’s belief in something other than Christianity.

June 22, 2015
New Gallup Poll Shows That Atheists Are No Longer the Least Electable Group in America
Next Post