Principal Fired After Giving Prayer Books to Staff; She May File Discrimination Lawsuit Against School Board June 21, 2015 Hemant Mehta

Principal Fired After Giving Prayer Books to Staff; She May File Discrimination Lawsuit Against School Board

Last week, DeKalb Community Unit School District 428 in Illinois voted 5-2 to fire elementary school principal Shahran Spears. Among the reasons for her dismissal were repeatedly examples of her using her position to push Christianity on the staff and students: 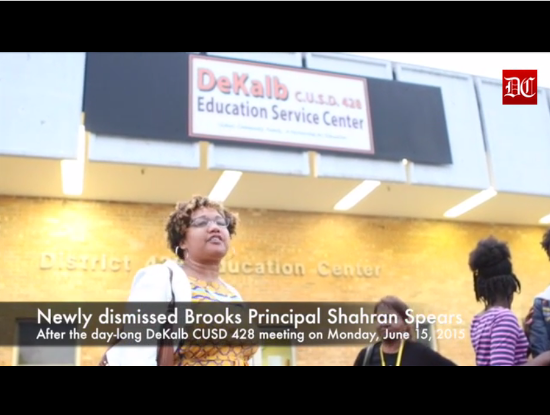 Those charges addressed a variety of alleged actions by Spears including using her district procurement card to buy copies of prayer and proverbs books titled “Inspire for Teachers: Prayers, Promises and Proverbs for those who change lives and touch hearts.”

Spears distributed those books to staff members during staff appreciation week, according to the documents.

Other religious-based behaviors noted by the board included using a song with religious undertones during the “Rise and Shine” morning meeting with students and teachers, documents showed.

You can read the letter from the Board to Spears detailing her wrongdoings right here.

That book, by the way, includes prayers like this one:

Father, in Jesus’ name, I speak Your Word over ________ (student’s name), who is temporarily experiencing a rebellious attitude. I pray, believe, and confess that he/she submits to God, resists the devil, and that the devil flees from him/her.

But Spears thinks that’s perfectly fine to give to staffers. Makes you question how she or her staff disciplines students…

Even worse? Some of those prayers are specifically targeting students with disabilities. So teachers were told to pray over those students, as if Satan was the reason for their disability.

My initial thought when I heard about these charges was that she made a mistake… but not necessarily one that required her to be fired. Maybe she just didn’t know better. If she promised never to do it again, I would have no problem with giving her a second chance.

Turns out she did get a warning already, back in November, when she sang that religious song with students and parents. The Board told her about the potential liability issues and that people complained to them about her conduct. She ignored this warning in May when she handed out Christian prayer books to her staff. That’s why she was fired.

A lot of supporters attended the school board meeting to defend Spears, as if their presence somehow overcomes a violation of the First Amendment. But when a principal, who may be excellent at her job in every other way, is breaking the law repeatedly, she becomes a serious problem. The board was right to dismiss her if those allegations are true.

Unaware of all that, perhaps, Spears may file a discrimination lawsuit against the District:

Shahran Spears’ lawyer said he filed Title VII claims with the U.S Equal Employment Opportunity Commission over the dismissal of his client and could get a green light to file lawsuit in 30 to 60 days.

I don’t see how she wins this. She did something wrong, was warned about the seriousness of the problem, and then did it again. How many second chances does she want? Or does she not think that pushing Christianity in a public school is a problem?

On a side note, the author of the prayer book, Josie Carr, is shocked that people are upset about it:

… “I am just appalled,” Carr told the Daily Chronicle. “A lot of public school teachers have that book.

“It has sold thousands of copies and because it has to do with teachers, it is given out a lot during staff appreciation weeks. It was marketed around that time with that very idea in mind.”

If teachers bought that book on their own, it’s fine. But when an administrator hands it out during a school function as if it’s something staffers should take seriously? Then it’s illegal. How Carr doesn’t know that is appalling, especially if, as she says, she was an administrator herself for eight years.

(Image via Daily Chronicle. Thanks to Brian for the link)

June 21, 2015
On Conservative Christians Blaming the Charleston Massacre on Atheism, Secularism, and an Angry God
Next Post

June 21, 2015 Proposed Michigan Laws Intended to Prevent Gay Unions Could Also Block Atheist Marriages
"Good. I’m not gunning for a murder verdict. He should get whatever is appropriate. It ..."
Synfandel TX Man Jailed for Setting Home ..."
"Thanks for your concern.I’m sorry for Mary. I suspect her cognitive dissonance is overwhelming. But ..."
BensNewLogin TX Man Jailed for Setting Home ..."
"The death of a child is quite unlike any other loss. One expects to eventually ..."
She of Penultimate Pulchritude “Psychic Medium” Thomas John Fell for ..."
"Yeah, trump is as much a devout Christian as I am. No wait, he's not ..."
Marly Duran Pastor to Pro-Conspiracy Crowd: “Trump Gave ..."
Browse Our Archives
What Are Your Thoughts?leave a comment