She was hoping they’d conform to the nasty stereotypes she had of atheists… but that wasn’t the case at all: 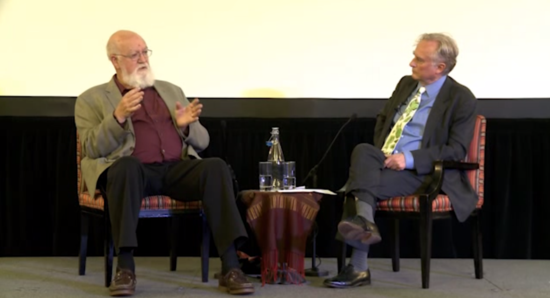 I’d hoped both men would be humorless, strident, militant, even obnoxious. Then I could go home feeling confident in my faith. Instead they were funny, charming, and quite likable. I went home deflated. I looked up everyone who’s debated them or contradicted them and argued for the wondrous mysteries of the divine. Then I feel asleep in a funk.

Also interesting were her conversations with audience members after the event was over, especially since many of them were raised Catholic:

There was an hour-long, book-signing line after last week’s lecture. So I asked some of those waiting patiently about the New Atheism’s appeal. Some common answers: It’s much more rational than angels and God-made-man. Too much of organized religion is corrupted by money and power. And cradle Catholics said just what you’d expect: They are unable to remain in a Church that treats women and gays as less-thans and sex as evil. Pope Francis may be a nice guy — and on the right side of climate change — but it’s not enough.

It’s a very honest piece — which is rare to see, especially when you’re talking about people who believe you’re wrong about something so personal. But Eagan (even though she went as a reporter) did something a lot of people are simply unwilling to do: She listened to what the atheists had to say so she could judge their words for herself.

Turns out the anti-atheist rhetoric she heard before didn’t match up with the people she met in person.

(Image via YouTube. Thanks to Scott for the link)

June 21, 2015
Bill Donohue: If Politicians Listen to the Pope on Climate Change, They're Violating Church/State Separation
Next Post