Christian Writer: God Wants Husbands to Withhold Money from Their Wives as Punishment

Nothing says “functional relationship” quite like punishing your stay-at-home spouse for perceived wrongs by cutting off all access to the family’s finances.

I’m sorry, did I say functional? I meant abusive.

This, however, is precisely the sort of relationship championed in a recent post by the anonymous advocate for Biblical family values at BiblicalGenderRoles.com. (You may remember his marital rape apologetics from last month.) 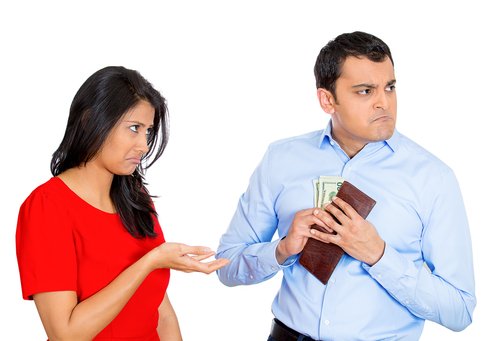 Let’s first get some background on BGR’s idea of a perfect family structure. In a God-fearing family, naturally, a woman’s role is in the house, taking care of the children and home. Man, by contrast, is tasked with providing for his family, by bringing in most (if not all) of the family’s income.

You might think, if the Good Christian Wife isn’t supposed to bring in substantial income, that the finances would be jointly-held (much like her unpaid work at home is enjoyed by the husband and children).

According to BGR, however, you’d be wrong. Not only is the Good Christian Wife’s access to the family income completely at the discretion of her husband, if she’s working, she doesn’t even get access to her own salary.

So no, Biblically speaking both spouses do NOT have an equal right to what the other makes. The husband is the authority of all income that comes into the home, whether through his wife or himself.

BGR says that a husband is responsible for making sure there’s a roof over the family’s head… and clothing and feeding her. Nothing more. A husband can choose to entrust her with the family purse, but he can at any time withdraw that access as well. For what reasons?

A husband can deny access to his income as long as he is providing the necessities of food, clothing and shelter to his wife. He may do this because his wife spends too much money, or he may use it as a form of discipline for other sinful behavior.

Withholding funds as a form of punishment? Check.

But what if that whole money thing is just too complicated for the poor wife to handle? Well, our friendly anonymous source for God’s thoughts has an answer for the concerned husband:

… there may not be any negative reason why he chooses not to give complete and equal access to the family finances. Some men might do this in order to shield their wife from some of the financial stresses the family may face. Whatever the reason, the truth is from a Biblical perspective a husband does not have to open the family finances to his wife.

If this sounds more like the relationship between a jailer and inmate than a husband and wife, well, never fear. This is just realizing the Biblical pattern for relationships.

The scriptures tell Christian wives that they are to submit to their husbands in “everything” (Ephesians 5:24) and this includes in the area of finances. A Christian husband is to be “one that ruleth well his own house” (I Timothy 3:4), and he does not have the option to take a “hands off” approach in this very important area.

Now, withholding and threatening to withhold money is a known tactic employed by abusers. But this is definitely, absolutely, certainly not abuse.

And for all those “abuse accusers” out there, this is not “financial abuse” according to our creator and God but rather this is the order and responsibly he has given to Christian husbands to provide for and lead their homes in this important area of finances.

This is nothing more than a way to lend divine empowerment to controlling, misogynist behavior. But it’s also worth pointing out that this kind of mindset would be damaging to all decent human beings, male or female. It would transform the marriage dynamic from a loving partnership to a ruler/ruled scenario, putting a heavy, solitary burden on the well-meaning husband (and giving carte blanche to the domestic tyrant) while diminishing the wife to a secondary, background role.

And according to BGR, that’s exactly how it’s supposed to be:

… [I]n the Biblical model of marriage, marriage is NOT an equal partnership, but rather a patriarchy (a male lead hierarchical relationship) that is symbolic of the relationship of God to his people.

While it can be hard to wade through so much misogyny, at least the article elucidates one point. It’s no longer surprising that so many pious Christians oppose same-sex marriage. It’s so obviously not Biblical. I mean, if there’s not both a man and a woman (or more) in the relationship, who is going to be the patriarch? Who is going to be the subservient party? And who balances the checkbook? And what if there are two husbands? Do they divide the house, so they can each rule as patriarchs of their own domain? Or do they divide the patriarchal duties on some sort of rotational calendar?

June 20, 2015
Arizona Sheriff Will Send Armed Guards to Black Churches Tomorrow Whether They Want Them or Not
Next Post