Jason Heap (below) wanted to become a chaplain in the U.S. Navy. He’s perfectly qualified for the position, too: He earned two master’s degrees (including one in divinity), passed his physicals, and completed the paperwork… but what he doesn’t have is the endorsement of a religious organization that’s currently approved by the Navy. 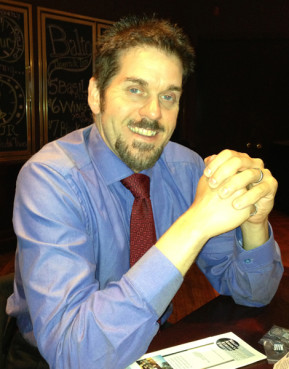 That’s because Heap’s endorsement comes from the Humanist Society.

Last June, the Navy rejected his application. They didn’t say why, only that a lot of people were rejected, but it’s not hard to connect the dots given Heap’s impeccable credentials.

Robyn Blumner, the executive director for the Richard Dawkins Foundation and project director for Openly Secular, explained at the time why the Navy’s decision is so narrow-minded and wrong:

The fact is there are more atheists and other non-theists in our armed forces than any other non-Christian denomination, yet there are currently no chaplains exclusively representing non-theistic beliefs. Non-theists in the military outnumber Hindus, Muslims and Jews combined, all of whom have chaplains for their respective religions.

Nonreligious service members face the same questions about life and death, fear and loss as any other person in the military. These brave men and women should not have to face them alone while their religious counterparts receive support and guidance.

Heap’s rejection represents bald-faced, government-sanctioned discrimination. It communicates a distaste for America’s largest growing cohort: people who profess to have no religious affiliation.

Heap issued only a brief statement after his rejection:

“I am exceptionally disappointed and aggrieved by the Navy’s initial rejection of my application,” he said in a written statement. “I will continue to seek acceptance. I hope military leaders will open their hearts to humanists and give me the opportunity to serve all sailors as a chaplain for the next 20 years or more.”

There’s been criticism, not against Heap, but against the very notion of a Humanist chaplain. Isn’t that an oxymoron?!

It’s really not. But you have to forget the word “chaplain” and think: “Counselor.” As Blumner noted, atheists, too, think about life and death and I imagine that’s even more pronounced when you’re in the military. Going to a religious counselor who doesn’t understand where you’re coming from is obviously not as helpful as speaking with a trained professional who gets your godlessness.

Having a Humanist chaplain would take absolutely nothing away from religious chaplains — just as a Muslim or Jewish chaplain wouldn’t. This is about maintaining a status quo. Opponents care more about maintaining their religious privilege than they do taking care of the mental health of so many men and women in the Navy who don’t believe in a god.

In November, Heap and the Humanist Society filed a federal lawsuit against the U.S. Navy, the Department of Defense, and a number of individuals in the military, alleging religious discrimination.

The lawsuit explained that the Navy was ready to approve him as a chaplain before his religious affiliation became known:

Navy recruiters assumed Dr. Heap would apply as a Christian. However, the Navy learned that Dr. Heap is a Humanist after The Humanist Society submitted its endorsement to the Armed Forced Chaplains Board in support of Dr. Heap’s application.

On or about the same time that Dr. Heap submitted his endorsement from The Humanist Society, a political and media firestorm erupted over his application. Members of Congress and advocacy groups sent letters to the Navy and Department of Defense opposing Dr. Heap’s application on the ground that he is a Humanist. Advocacy groups lobbied Congress to prevent federal funding from being used to support a Humanist chaplain, and legislation was introduced in the United States House of Representatives to deny federal funding for any Humanist chaplain.

After the Navy learned that Dr. Heap is a Humanist, and in the midst of public controversy, the Navy’s attitude changed radically.

Dr. Heap’s application was not denied because of any fault in his abilities or credentials or because a better-qualified applicant emerged to take his place. Dr. Heap’s qualifications and experience far exceed the standards articulated by the Navy for accepting applicants. Rather, the Navy denied his application because of his Humanist beliefs. The Religious Freedom Restoration Act and the U.S. Constitution’s Religious Test Clause and First and Fifth Amendments prohibit the Navy’s discriminatory denial of Dr. Heap’s application on the basis of his religious views.

What makes this case especially compelling is that if Heap were a theist, he’d easily be a chaplain by now. His credentials are just rock solid. He doesn’t just meet the standards, he exceeds them.

How do Heap and his lawyers defend the idea that Humanism is a religion? They say it addresses fundamental and ultimate questions of life, offers a comprehensive worldview, has customs and holidays and rituals (even if not all Humanists practice them), has important writings like The Humanist Manifesto, and followers look to propagate their beliefs.

Really, other than the believing-in-God bit, they argue, Humanism is just like any religious faith. So there’s no reason to reject Heap on those grounds.

The lawsuit wants the judge to instate Heap as a chaplain immediately, recognize The Humanist Society as a “qualified ecclesiastical endorser,” and forbid the Navy from rejecting future chaplain applicants on the basis of their Humanism.

Heap has done everything right. He just happens to be an atheist. And that’s not a reason to deny him this title.

Yesterday, both sides had their day in court. The Navy argued that Heap had relatively little experience as a religious leader… which is both true and false. True, because he’s not part of an organized religion. False, because he has *so* much experience as a non-theistic leader who is endorsed by the Humanist Society.

Navy lawyers said in court on June 18 that the Defense Department has never properly ruled on whether to recognize Humanism as an official religion because no individual chaplain applicant has ever cleared the initial screening process that rejected Heap.

The solution would be for the Defense Department to get its shit together and approve Humanism as a belief system… or for Judge James Cacheris to do it for them.

Right now, the easiest route would be through the judge, who will issue his ruling “soon.”

June 19, 2015
Great Advice for Ex-Muslims During Ramadan
Next Post