Despite Warning, Florida Sheriff Will Deliver Another Sermon in Uniform This Weekend June 19, 2015 Hemant Mehta

Despite Warning, Florida Sheriff Will Deliver Another Sermon in Uniform This Weekend

Polk County (Florida) Sheriff Grady Judd is the guy who has no idea what the boundary lines are between church and state. He’s given government presents to local churches and delivered sermons at a local church in uniform. 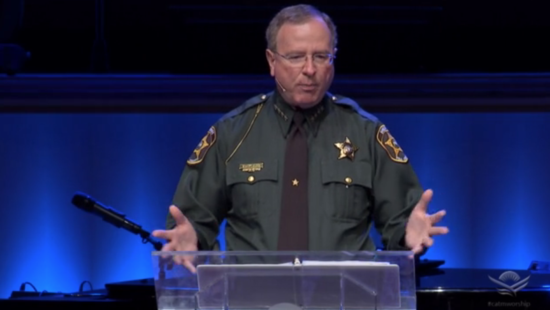 A few days ago, the Freedom From Religion Foundation sent Judd a formal letter of complaint warning him to stop his endorsement of religion while in his position as Sheriff.

So guess what he’s done now?

He signed up to deliver another sermon in uniform at Fellowship Church in Lakeland:

This Father’s Day, June 21, 2015 we will have Sheriff Grady Judd as our special guest speaker! You will not want to miss this service as the Sheriff will be speaking directly to our fathers and sons.

Here’s how this is going to play out. The local government very likely will be sued. Because this is a black and white case, and because Judd is clearly violating the law and doesn’t give a damn, when the county loses, it’s the taxpayers who will have to cover the bill.

The county might as well raise taxes on everyone now since this is a foregone conclusion.

The most stunning part is that this is completely preventable. If Judd swapped his Sheriff uniform for street clothing and delivered the sermon as Grady Judd, local citizen, there would be no problem.

But he won’t do that. He’s too stubborn, too ignorant, too proud, and too “persecuted” to do the right thing.

He’s gonna break the law and make the citizens pay for his arrogance.

June 19, 2015 Christian Pastor: If Gay Marriage is Legalized, We Should Be Ready to Burn to Death
Browse Our Archives
What Are Your Thoughts?leave a comment