The Supreme Court Was Wrong to Rule That Texas Could Reject a Confederate Flag License Plate June 18, 2015 Hemant Mehta

Earlier today, in a weird 5-4 decision that had Justice Clarence Thomas siding with the four liberals, the Supreme Court ruled that Texas had the right to reject a specialty license plate for the Sons of Confederate Veterans with a Confederate flag on it: 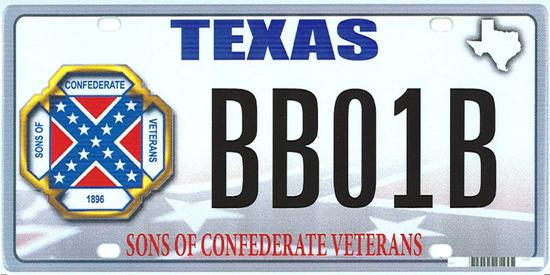 Nine states have let drivers choose specialty license plates featuring the Confederate battle flag and honoring the Sons of Confederate Veterans, which says it seeks to celebrate Southern heritage. But Texas refused to allow the group’s plates, saying the flag was offensive.

Texas has hundreds of specialty plates. Many are for college alumni, sports fans and service organizations, but others send messages like “Choose Life,” “God Bless Texas” and “Fight Terrorism.”

So personalized plates are okay… unless Texas officials find them offensive, in which case they can say no.

I’m tempted to agree with the officials because that symbol is an odious one, but the broader implications of this case are frightening because it gives states the right to say no to the messages of groups they don’t like.

Texas license plates are, essentially, government IDs. And issuers of ID “typically do not permit” the placement on their IDs of “message[s] with which they do not wish to be associated.”…

Indeed, a person who displays a message on a Texas license plate likely intends to convey to the public that the State has endorsed that message. If not, the individual could simply display the message in question in larger letters on a bumper sticker right next to the plate. But the individual prefers a license plate design to the purely private speech expressed through bumper stickers. That may well be because Texas’s license plate designs convey government agreement with the message displayed.

I’m just not buying that. A specialty design on a license plate doesn’t convey the state’s endorsement at all. I have to agree with Justice Samuel Alito (god, I feel dirty saying that…) who expressed the same sentiment in his dissent:

If a car with a plate that says “Rather Be Golfing” passed by at 8:30 am on a Monday morning, would you think: “This is the official policy of the State — better to golf than to work?” If you did your viewing at the start of the college football season and you saw Texas plates with the names of the University of Texas’s out-of-state competitors in upcoming games — Notre Dame, Oklahoma State, the University of Oklahoma, Kansas State, Iowa State — would you assume that the State of Texas was officially (and perhaps treasonously) rooting for the Longhorns’ opponents? And when a car zipped by with a plate that reads “NASCAR — 24 Jeff Gordon,” would you think that Gordon (born in California, raised in Indiana, resides in North Carolina) is the official favorite of the State government?

While all license plates unquestionably contain some government speech (e.g., the name of the State and the numbers and/or letters identifying the vehicle), the State of Texas has converted the remaining space on its specialty plates into little mobile billboards on which motorists can display their own messages. And what Texas did here was to reject one of the messages that members of a private group wanted to post on some of these little billboards because the State thought that many of its citizens would find the message offensive. That is blatant viewpoint discrimination.

Maybe it’s all well and good when the state is rejecting the Confederate flag, but they now also have the ability to reject a message that says “In God We Don’t Trust,” too.

Americans United for Separation of Church and State, believe it or not, agrees with the conservatives on this one (they filed an amicus brief defending the state officials):

“Speech that some people deem ‘offensive’ is still protected speech,” said the Rev. Barry W. Lynn, executive director of Americans United. “Today’s ruling could make it harder for members of some groups, such as unpopular religions and atheists, to use license plates to express messages.”

AU makes clear that this narrow ruling only applies to specialty plates in Texas and not the actual license plate number, an important distinction considering that the group is still fighting a lawsuit defending the “8THEIST” license plate in New Jersey.

June 18, 2015
New Research on the Science vs. Religion Debate Looks at the Effectiveness of Different Science Popularizers
Next Post

June 18, 2015 Rep. Jody Hice: Church-State Separation is a False Belief and Secular Government Would Lead to Chaos
Browse Our Archives
What Are Your Thoughts?leave a comment