Rep. Jody Hice: Church-State Separation is a False Belief and Secular Government Would Lead to Chaos

Speaking to the Future Conference (run by California’s Skyline Church) yesterday, Rep. Jody Hice (R-GA) told the audience that separation of church and state was a “false belief” that didn’t exist in the Constitution… ignoring the Establishment Clause of the First Amendment. 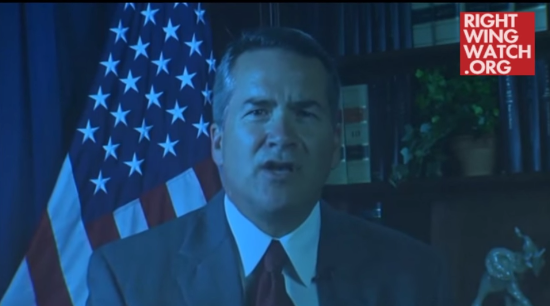 Hice also offered up the hypothetical differences between two towns, one secular and one embracing a Judeo-Christian worldview.

The atheist divorce rate is no higher than it is for Christians.

Sociologist Phil Zuckerman says that “Murder rates are actually lower in more secular nations and higher in more religious nations where belief in God is widespread.” (And atheists are hard to find in prisons.)

The more religious the state, the higher the teen pregnancy rate.

Which makes you wonder: What part of any of this is “historically accurate”? )(Then again, Hice is the same person who once said electing atheists to Congress would be a “frightening thing.” Clearly, he hasn’t educated himself on this issue.)

Hice has a habit of lying. I guess doing it in front of a church audience is old hat to him by this point.

June 18, 2015
The Supreme Court Was Wrong to Rule That Texas Could Reject a Confederate Flag License Plate
Next Post

June 18, 2015 An Ever-Growing List of What Conservatives are Blaming for the Charleston Shootings
"Your eloquence escapes me."
Die Anyway CA Pastor Tells Church: “Do Your ..."
"How is *God* healing you if you've got chemo pumping through your veins at a ..."
Kelley Gaither AL Megachurch Pastor Micahn Carter Resigns ..."
"I usually go for a bowl of ice cream. Makes me right with the world ..."
Die Anyway CA Pastor Tells Church: “Do Your ..."
"What anime hell world have we been isekaied to?"
The Mighty Damuramu (pka TOW) Scott Lively: If “Patriots” Lose in ..."
Browse Our Archives
What Are Your Thoughts?leave a comment