Over the weekend, there was a County Fair in Springfield, Tennessee.

Wherever you see big crowds in the South, you’re bound to see street preachers, and this was no exception. The problem was that the Christians who were trying to convert the (I’m assuming mostly Christian) crowd were so belligerent and obnoxious, they were breaking the code of conduct for fair-goers: 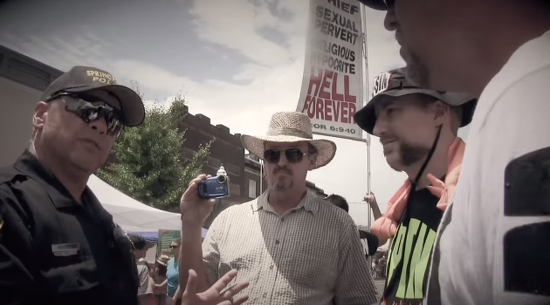 Springfield police arrested John Laymond Davis, 49, of Albemarle, N.C., and John E. McGlone, 54, of Breeding, Ky. Both men were charged with disorderly conduct. They were booked and released from Robertson County Jail the same day on $1,500 bond.

[Police Chief David] Thompson said the two men arrested were part of a group of a dozen who were passing out literature and preaching to people.

The Christians, taking pride in their faux-persecution, posted video documenting their preaching and arrest and offering commentary after being let out of jail:

But there’s also this comment by one of the men:

Riiiight. Getting punished for being a jackass is *totally* like those Christians who are legitimately persecuted in certain countries for the “crime” of not following the majority faith.

Saying that you’re in their league is like calling yourself a “gangster” after giving yourself a paper cut. Just because there’s blood doesn’t mean you’re a badass.

They’re not even good evangelists on their own terms. My perception of the video is that they wanted to get arrested so they could cry foul. If they were really interested in getting people to convert, they wouldn’t do it by being so annoying that people at their fair just try to avoid them at all costs. Just watch their video: It’s full of yelling at nobody in particular and starting arguments with the few people willing to talk to them.

Why anyone would think that’s effective, I have no idea.

(Thanks to Shane for the link)

June 18, 2015
How Babies Are Made: The Version They Don't Tell You in School
Next Post

June 18, 2015 Virginia Baptist Church Sign: "Satan Was the First to Demand Equal Rights"
Browse Our Archives
What Are Your Thoughts?leave a comment