Last month, Danny Akin, the President of the Southeastern Baptist Theological Seminary, recorded a video explaining why he supports the “Openly Secular” campaign: 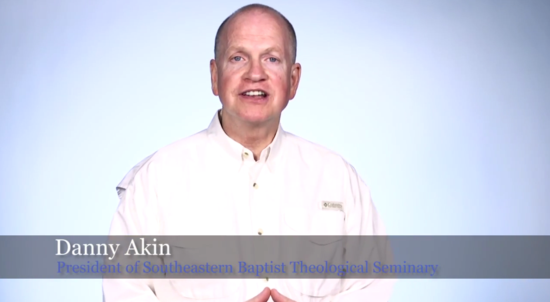 Though we do disagree on some very important issues, we also agree on some important things as well. For example, we do believe together that no one should be coerced when it comes to their particular religious beliefs, whether they are religious or not religious, they should have the freedom to express what they believe and they should be able to do so without hatred, without discrimination…

We also believe that all people are valuable and have dignity and worth. And therefore, all people should be respected and should be allowed to express their beliefs openly according to the dictates of their conscience.

To be clear, he wasn’t saying he’s secular himself, only that he stands behind those of us who are. It was a surprising, but very welcome video to see. There’s no reason any Christian who fights for “religious liberty” couldn’t make a similar statement.

Over the weekend, however, the annual meeting of the Southern Baptist Convention took place in Columbus, Ohio, and Akin was accosted by one audience member about his participation in the campaign:

My name is William Blosch… My question is directed to Dr. Akin.

Dr. Akin, I would like to know why you, as one of our seminary presidents, posted a video in support of Openly Secular. Openly Secular is, as the name implies, a totally secular organization whose agenda is to celebrate an evolutionary, anti-Christian worldview, homosexuality, atheism, Agnosticism, amorality and immorality, and every other ungodly movement of our society with which we have no common ground.

You also clearly identified yourself as the President of Southeastern Seminary which gives the world the impression that Southern Baptists support Openly Secular. You had absolutely no right or authority to speak on behalf of Southern Baptists in this manner…

I would just like to know why you, as one of our seminary presidents, posted this video.

Just to state the obvious, Openly Secular is not anti-Christian, nor is it pro-amorality/immorality. It’s about supporting those who don’t believe in God and fighting to end societal discrimination against non-religious people. There’s no reason religious people can’t get behind this.

So Blosch was condemning something he knew nothing about. (Shocking…)

But Akin’s response was excellent. He pointed out that, yes, there are disagreements with the two sides (as he said in the video), but Baptists ought to support freedom of conscience and religious liberty. That’s all he was doing, so what’s wrong with that?

We never get to see Blosch’s reaction to that response, but I imagine there’s still smoke coming out of his ears.

After all, Southern Baptists don’t exactly have a reputation for being tolerant of those who don’t agree with them. Kudos to Akin for trying to fix the stereotype against his own tribe.

June 17, 2015 Molesting Preacher Walks Free After Sheriff Says He Already Suffered a "Spectacular Fall from Grace"
Browse Our Archives
What Are Your Thoughts?leave a comment