Over the past few years, Walter Masocha (below), a former lecturer at Scotland’s Stirling University, became leader of the Agape for All Nations Church, a religion of his own creation. 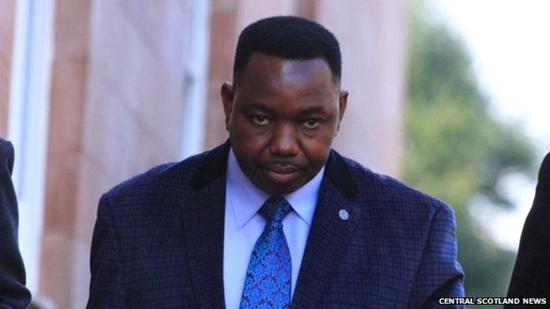 And he used his authority to molest a young girl and assault another woman:

During the trial the schoolgirl now 16, said she regarded Masocha as her “spiritual father”, and like many people in the church called him “Dad”.

She said in late 2013 she was with other girls in an upstairs games room when Masocha came in and waved her over.

“He repeatedly pinged my underwear, ran his hand down my bottom, and grabbed and pinched my bottom.”

In another incident, when she was 13 or 14, she said Masocha had been sitting down at his home, very close to her, advising her about school when he suddenly said, “You’ll always be mine”, and kissed her on the lips.

She wasn’t his only victim:

The deaconess, a 32-year-old mother-of-four, was also told The Prophet had been “trying to remove ‘something’ from her genitals”.

On another occasion said she had once gone to his office for prayer with a stomach complaint.

She said: “He said he was going to pray it away. He touched my tummy, then his hand went down my body, onto my private parts.

All of this is horrific and traumatic. Surely he would get a severe punishment for assault and molestation?

Sheriff Kenneth McGowan, after acknowledging these crimes, let Masocha off the hook with only 250 hours of community service and a spot on the sex offenders’ registry for a single year.

Just wait till you hear his reasoning:

Sheriff McGowan said the law required courts only to impose custodial sentences when no other disposal was appropriate.

“The criminal justice social work report has assessed you as suitable for a community-based disposal, and in addition you have already suffered a spectacular fall from grace.”

Yes, his life is so hard that his reputation is ruined… and isn’t that punishment enough? Sure, his victims will be mentally scarred for life, but… but… his reputation!

The Deaconess was in shock after the “punishment” was handed down:

The 32-year-old deaconess – a mother of four who cannot be named – said she was in “total shock” about the sentence.

“He molested me and now he walks free,” she said tearfully.

“So many other women who he has attacked will now not come forward because they are scared of what may happen.

“These women will think, what is the point?

“I do not know what planet this is but it is wrong.”

If the man wasn’t a preacher, is there any doubt he’d be in jail right now?