Confidence in Organized Religion at an All-Time Low… Again

How much confidence do you have in the church/organized religion?

That’s the question Gallup recently asked people. Then they grouped together those who had a “Great Deal” or “Quite a Lot” of confidence in religion. Even combined, the resulting trend has a beautiful downward slope that just hit a new all-time low: 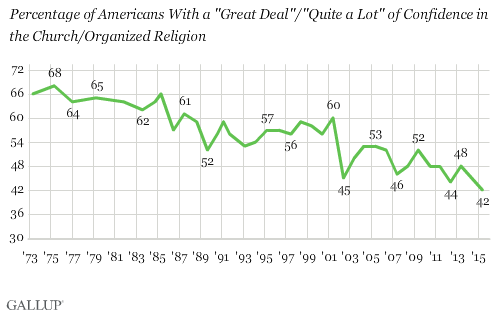 Confidence in religion began faltering in the 1980s, while the sharpest decline occurred between 2001 and 2002 as the Roman Catholic Church grappled with a major sexual abuse scandal. Since then, periodic improvements have proved temporary, and it has continued to ratchet lower.

That reference to the 1980s may be due to the fall of some big-name televangelists (like Jim Bakker and Jimmy Swaggart).

Maybe you think Americans are less confident in all of our institutions and religion is just part of that trend? In terms of confidence, it ranks fourth-highest among those surveyed — but religion is still doing poorly even on its own terms. While it has historically had 55% confidence, this year’s 42% is much lower compared to dips in other institutions.

Also worth noting in the Gallup data is the fact that confidence in organized religion is also at an all-time low even among Protestants. It’s at 51% compared to an all-time high of 74%.

Among the Nones, of course, 59% have little or no confidence in organized religion. 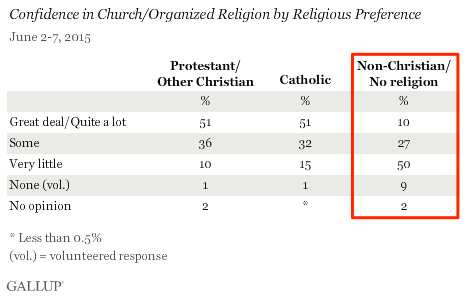 I’ve said this before, but this is why we have to keep pointing out and criticizing the problems within Religious America.

When it comes to homosexuality, for example, Americans are becoming more progressive while Christian churches lag far behind. If (when?) the Supreme Court legalizes gay marriage nationwide, and if some churches respond by becoming even more homophobic, they’ll only be hurting themselves.