As Daesh/ISIS has taken over parts of Iraq, they’ve displaced a lot of citizens along the way. One estimate says that more than 100,000 people have left the capital of Ramadi alone to avoid the terrorist takeover. 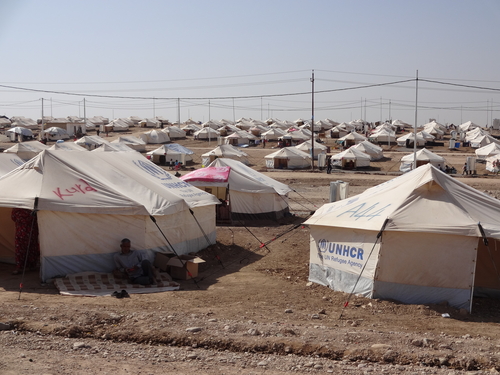 Perhaps you’ve wondered how you can help make a difference in Iraq for such a dark time as this. How can you care for the oppressed and hurting? Most importantly, how can you make an eternal difference in the lives of the Iraqi people?

Yes, Michael, how can we help?!

Give us the answer!

Our project, Bibles for Iraq, will focus on bringing the Scriptures to as many refugees as possible — many of whom cannot read or write and have NEVER had access as much as they do now. In America, Bibles are easily accessible, but not so much in Iraq, and especially not when you live as a refugee. And as most refugees are illiterate, imagine the compounded difficulty in ever being able to receive the Scriptures.

The last thing people these people need is a Bible. They are struggling to survive. They need shelter. Replacing their religion with another kind of fiction won’t do anything to improve their situation.

(Unless Marcavage is giving them paper to make fire with, in which case I guess he’s doing them a favor… but that’s clearly not what he has in mind.)

But leave it to Marcavage to solve the real problem here: illiteracy.

… we have an opportunity to purchase special solar-powered audio Bible devices that can reach illiterate Iraqis by bringing the people the Scriptures at the touch of a button. These audio Bibles will be uploaded with both the Old and New Testaments, programmed for dual languages — Arabic and Kurdish — and will provide many Iraqis who may never otherwise hear the gospel the opportunity to receive the power of God unto salvation.

Oh good. I was worried for a while that the Bibles might be useless. 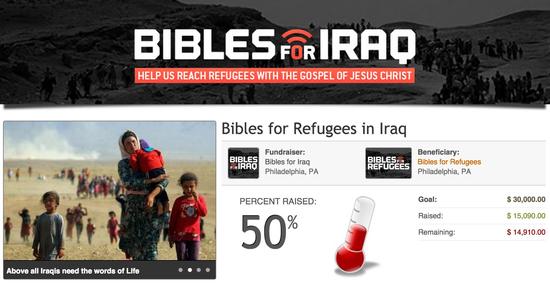 There’s a group called Action Against Hunger that’s providing these refugees with food and water. In other words, things to help the refugees in this life instead of the next one. If you’re looking to make a donation, consider giving to them.

June 17, 2015
Southern Baptist Leader Says He Won't Officiate Gay Weddings (Not That Anyone Was Asking Him To)
Next Post