That is not the headline about Pope Francis that you’ll find everywhere else in the media today. No, they’re in a fawning frenzy at the moment over his new encyclical supporting climate change action. Though I strongly believe climate change is the greatest threat of our time, I’m not donning my party hat. Catholic leaders have been saying the same thing for at least fifteen years, without successfully finding an approach that actually shifts the views of Catholics, at least not in America. And like Francis, Pope Benedict urged climate change action while opposing gay rights, saying both rainforests and gays needed to be saved. Which led to one of the greatest Daily Mash headlines of all time:

Imagine how quickly these same media outlets would have turned if the Pope had warned instead of the danger of, say, Hinduism. Needless to say, anti-secularist bigotry isn’t going away anytime soon.

So don’t look to them to point out the failed promise of headlines like these: 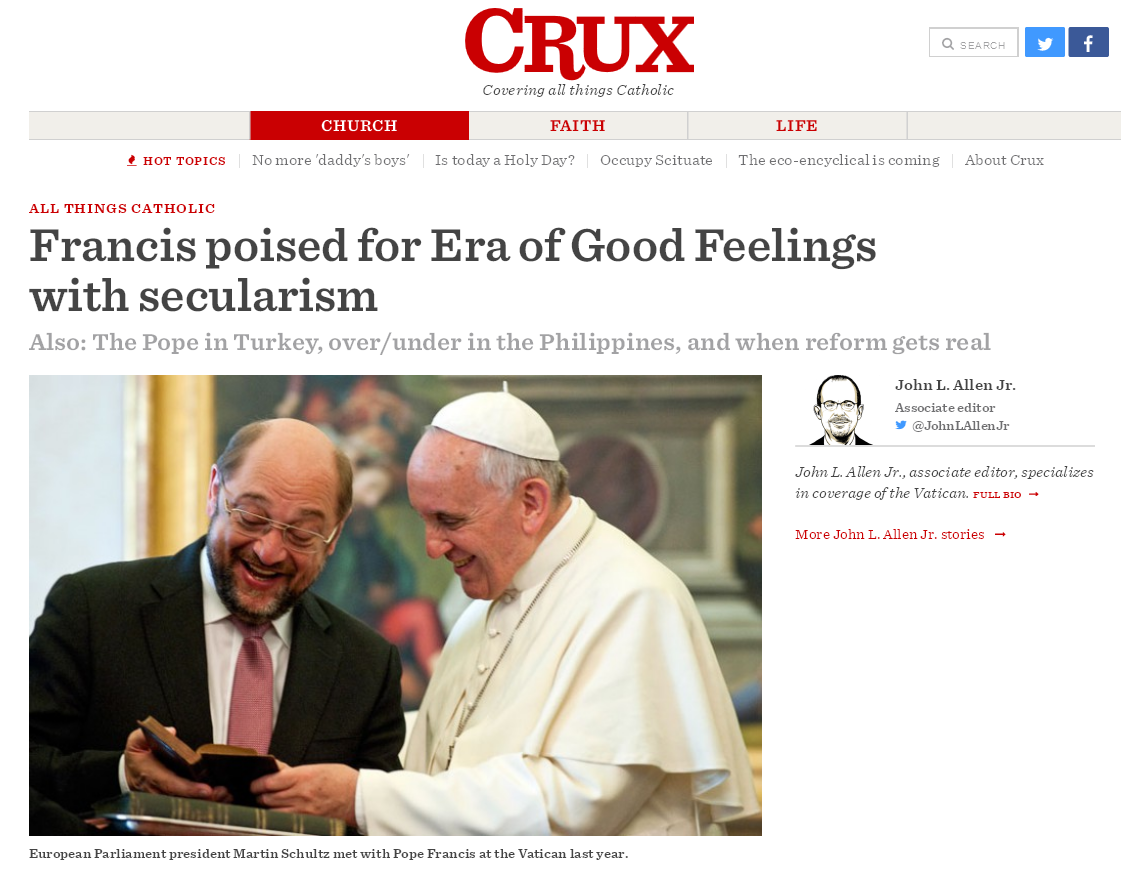 Francis poised for Era of Good Feelings with secularism

That’s right, “Pope Fluffy” (as the Center for Inquiry’s Paul Fidalgo calls him when noting media hype of Francis’ supposed liberalism) had a more overlooked message last week. For “social peace,” “dignity and human freedom,” “human maturity” and “friendly openness,” he has a strategy: Let’s promote hostility toward people with secular philosophies, deny rights to LGBT people, and indoctrinate children before they can understand philosophy — which, of course, would be too late.

The Vatican is reporting the text of an address by him in Rome on June 11, given to visiting Episcopal bishops from Latvia and Estonia:

The Lord has chosen to work in your nations that, after having long been oppressed by regimes founded on ideologies contrary to dignity and human freedom, are called today to compete with other dangerous pitfalls, such as secularism and relativism.  While that may make it harder for your pastoral action, I urge you to continue tirelessly, never losing faith, to proclaim the Gospel of Christ, the Word of salvation for people of every age and every culture.

In this renewed evangelization you are not alone. You have your priests, who, although a few of various origins, work side by side with respect, obedience and generosity. Also feeling the urgency is an active vocational ministry that, relying on prayer to the “Lord of the harvest to send out laborers into His harvest” (Matthew 9:38), is taking charge of building awareness among families, parishes and the entire Christian community, so that children and young people are helped to make themselves available to God’s call.

Always thinking of the priests, I encourage you to look well to their training, both in terms of theological and ecclesial, and of human maturity, rooted in a solid spirituality and characterized by friendly openness and discernment of the reality of the world in we live in.

At the same time, both they and you are in daily contact with other Christian traditions present in your territory, and together you can support the ecumenical dialogue, so necessary today, in view of the social peace sometimes shaken by ethnic and linguistic differences.

No trace of intended irony was apparent.  Achieving peace by sowing division seems to make perfect sense to him.  Irony was similarly missing when he urged the Episcopal bishops to promote male-female marriage over, you know, the other kind:

I would then also share with you a determination to promote the family as a gift of God where man and woman, created in His image, form the “fundamental cell of society”, “the place where you learn to live with differences…”

Because, of course, it’s only by excluding same-sex couples from marriage that we teach children to respect diversity.

So, good work, Fluffy. The religious headlines this past week have picked up your bigotry and have been trumpeting the “dangers of secularism.” That’s surely the way to promote peace, understanding, and living with differences.

***Edit***: To avoid confusion, we removed the word “Episcopal” from the headline.

June 16, 2015 Texas Mayor Defends "Jesus Welcomes You to Hawkins" Sign, Saying That Critics Would Also Oppose Superman
"You might just want to Google Chevron and Amazon rainforest....."
Holytape Christian Group Reposts List of “Naughty” ..."
"Christians must be outraged by this and start protesting against this violence and abuse.[...]Oh, wait! ..."
bombcat FL Man Charged with 1,200 Counts ..."
"I'm talking Fritzl as being worse for the victim, too.'Pregnant without abortion' is only your ..."
SltryPrNstyBrtsh&Shrt FL Man Charged with 1,200 Counts ..."
"Nekked except for an artfully-positioned sprig of holly, right? And the strategically-placed bunch of mistletoe, ..."
Andy Horsuroddinon Christian Group Reposts List of “Naughty” ..."
Browse Our Archives
What Are Your Thoughts?leave a comment