Conservative columnist Cal Thomas discussed same-sex marriage this past Sunday on Fox News, and the interview is worth watching if for no other reason than to observe the spin. Thomas believes the rights of gay and lesbian couples matter less than the imagined impact they will have on, well, people like him.

It’s an absurd idea, unless you consider discriminating against other people a “right” you have. But as Thomas tells it, the United States will soon start imprisoning pastors for speaking out against same-sex marriage. 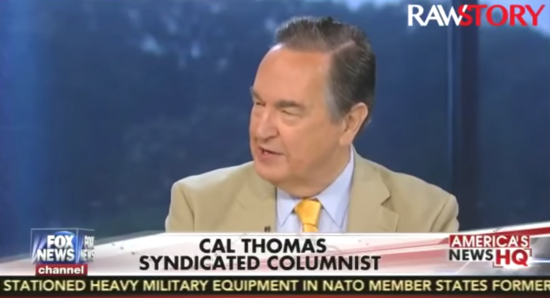 Even during the anti-slavery movement, even the pro-slavery movement in the South in the United States, the United States government didn’t come in and try to keep pastors from preaching either for or against slavery. They let them have freedom of speech. You hear a lot from the left about the separation of church and state. A lot of evangelicals would would be happy if the state got back on its side of the line.

Thomas mentions the human rights clauses in other countries as the only support for this absurd claim, that the United States government is somehow coming for the free speech of Christians. That idea might carry a little more weight if the government was actually doing (or even suggesting) this, or if it had already done something similar in past circumstances. That’s not the case. In a country where even the Westboro Baptist Church operates freely, protected rather than inhibited by the law, run-of-the-mill evangelical pastors aren’t going anywhere.

The fact is, legal recognition for same-sex marriage is not an imposition on churches or a crossing by the state of the wall of separation; on the contrary, it’s the church that’s crossing the line by saying gay and lesbian couples should be denied legal rights.

Thomas was far from finished with absurdities, however. He was perplexed as to what would stop the court from extending marriage rights to “the polygamists” and “the adult-child marriage people,” if equal protections cover “gays, lesbians, transgenders and the rest.”

Informed consent seems to be a perpetually difficult concept for conservatives to grasp (see: Ken Ham‘s “why not bestiality and pedophilia?” rant), so I’m not terribly surprised that he struggles with what secular criteria one could use to decide that an adult shouldn’t marry a child.

What criteria does he embrace?

Produce department disasters notwithstanding, there are at least two points worth making here. The first is that the Biblical standard of marriage includes a host of odious arrangements that our own standards have long ago banished. Arrangements like the murder of a girl’s family and community, and her subsequent “marriage” to (i.e. rape by) her family’s killer (Judges 21:10-14). Arrangements like the marriage of a rape victim to her rapist (Deuteronomy 22:28-29). And, honestly, it’s hard to believe Thomas mentioned polygamy with a straight face, given the multitude of wives and concubines the Biblical patriarchs are supposed to have taken.

Our laws are guided, then, by something a lot more civilized than Scriptural views on marriage.

Aside from Thomas’ lack of knowledge of the very thing he’s advocating for, it’s important to note that the reason the Supreme Court is reviewing same-sex marriage right now is precisely to apply a constitutional standard. As with the Wall of Separation, Thomas pays lip service to a concept while actually advocating for the opposite: as he notes, the legality of same-sex marriage seems inevitable. That’s because there is no constitutional basis for depriving gay and lesbian couples of legal marriage rights.

Thomas isn’t upset that the Constitution is being overruled; he’s afraid that it will actually be upheld.