Last week, Australians Nick and Sarah Jensen made international headlines when they said that if gay marriage was legalized in their country, they would get a divorce after ten years together. I guess that would show that legalizing gay marriage clearly affects straight ones. 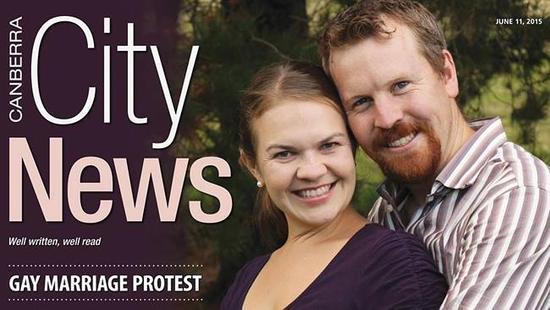 If you read the fine print to the story, then you also knew they were still going to live together, still planning on having more children, and still going to call each other “husband” and “wife.”

Since then, we’ve learned a few more things about the legal aspects to their faux-divorce.

For one, it wouldn’t even be valid:

… the Family Law Act states that an application for divorce will only be considered if the parties had separated and lived separately for a continuous period of at least 12 months.

Family lawyer Denis Farrar said the court also needs to be satisfied that there is no reasonable likelihood of cohabitation being resumed.

“It surprises me that any sensible person would make such a threat, because you can’t get a divorce unless you’ve been separated for 12 months,” he said.

“It doesn’t sound like Mr Jensen could truthfully swear that those facts are correct. And in that case he may apply for a divorce, but he won’t get it unless he lies.”

In this case, gay marriage would hurt straight marriage by stopping a straight couple from divorcing… And that’s a sentence that only makes sense when you use Twisted Christian Logic.

We also learned that the couple’s close friend uninvited them from her own wedding because they’re an embarrassment to her:

After stewing over it over dinner last night, my fiance and I have decided the best thing to do is to make sure Nick understands how little he and his twisted world view matters. Couples all over the world of mixed race, mixed religion and now, at least in some countries, the same sex, enjoy a married life their forebears could not have dreamt would one day happen — and Nick and Sarah’s sham divorce will have zero impact on their lives. None.

Nick says that his statement is neither a protest nor a threat, but simply “something we’re explaining is the consequence of any change in legislation”.

Well, Nick, I’m sure you’ve come to appreciate over the past 48 hours that it’s not just changes to legislation that have consequences. Newspaper articles do, too. And here’s one of them, albeit a small one — I don’t want you anywhere near my wedding. You and your views are not welcome, because you’re right — the institution we’re marrying into isn’t the same one you think you’re in.

This whole attempt at making a statement has royally backfired. Good. It just proves how legalizing same-sex marriage offers so many benefits to so many people with so few (if any) downsides. I guess we can thank the Jensens for making that even more obvious than before.

June 16, 2015 An Atheist Rock Song for Those on the Fence About Their Faith
Browse Our Archives
What Are Your Thoughts?leave a comment