Southern Baptist Manual Offers Suggestions on How to Get Around LGBT Anti-Discrimination Laws June 15, 2015 Rachel Ford

The Ethics and Religious Liberty Commission of the Southern Baptist Convention, in partnership with the notoriously anti-gay Alliance Defending Freedom, have helpfully put together a publication to help religious people avoid the scourge of equality.

The result, Protecting Your Ministry, is available in PDF format for free online. And there’s plenty of interesting tidbits nestled among the 44 pages of persecution narrative and recommended legal manipulations. 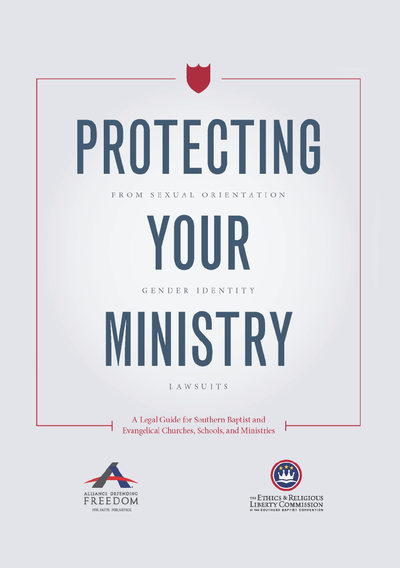 Early on, the manual lays out the threat facing religious people nowadays: that one’s religious beliefs may no longer be a valid legal reason to discriminate against LGBT people. Naturally, anti-discrimination efforts are just nefarious attempts at persecution.

This concept has led to the passage of sexual orientation, gender identity ordinances (SOGIs). SOGIs elevate sexual special interests over our cherished fundamental freedoms, especially religious freedom. These ordinances place terms like “sexual orientation” or “gender identity” in the same category as race or religion. But they are not designed for the innocent purpose of ensuring all people receive basic services. Rather, their practical effect is to legally compel Christians to accept, endorse, and even promote messages, ideas, and events that violate their faith.

Those promoting these ordinances use public sympathy — gained through misleading rhetoric about “discrimination” — to silence dissenting voices. And no ministry will remain immune if they remain true to Scripture’s teachings about sexuality and gender.

The writers don’t really have an issue with non-discrimination measures for religion or race, but they argue that adding gender identity or sexual orientation to that list somehow uniquely compels an endorsement of those characteristics. How so? How is a homophobic Christian any more affected by these measures than, say, a racist Christian would be by laws protecting people of color?

But that’s how the argument goes. The manual goes on to cite instances of this alleged persecution — that these laws attempt to compel “Christian photographers, bakers, and florists to participate in same-sex ceremonies.” As if selling a product to a couple means “participating” in their wedding in any meaningful way.

The writers (rightly) seem to take it for granted that it’s okay to prevent someone from refusing service to a couple based on race or religion, since they don’t indicate any issue with laws that conflict with religious beliefs in those instances. However, when their own religious biases are in conflict with the law, that’s when it becomes persecution.

In order to combat these horrors, they offer plenty of advice on how to “ensure the broadest religious liberty protections available under the law” to Christian churches, schools, and ministries. Their advice for “ministries” is particularly interesting:

When feasible, a religious organization should assign its employees duties that involve ministerial, teaching, or other spiritual qualifications — duties that directly further the religious mission. For example, if a church receptionist answers the phone, the job description might detail how the receptionist is required to answer basic questions about the church’s faith, provide religious resources, or pray with callers. Consider requiring all employees to participate in devotional or prayer time, or to even lead these on occasion.

Employees with some duties usually performed by (or associated with) clergy are more likely to be viewed as “minister-like” by the courts. Consequently, courts are more likely to apply the ministerial exception to employment law claims based on alleged discrimination.

Essentially, the Ethics and Religious Liberty Council is advising religious people to behave in some decidedly unethical ways to subvert the intention of the law. They bolster this with a reference to the Hosanna-Tabor case, in which the Supreme Court ruled that a Lutheran teacher’s job was ministerial work.

Ian Millhiser at Think Progress explains the many differences between the case in question and a “receptionist who sometimes ‘answers basic questions about the church’s faith’”:

“To be eligible to become a commissioned minister,” the Court explained, Perich “had to complete eight college-level courses in subjects including biblical interpretation, church doctrine, and the ministry of the Lutheran teacher.” She had to “obtain the endorsement of her local Synod district” through an application process that required her to submit “her academic transcripts, letters of recommendation, personal statement, and written answers to various ministry-related questions.” And she had to complete an oral examination presided over by faculty from a Lutheran college. It took Perich six years to complete these requirements.

In her job as a teacher, moreover, Perich “taught her students religion four days a week, and led them in prayer three times a day. Once a week, she took her students to a school-wide chapel service, and — about twice a year — she took her turn leading it, choosing the liturgy, selecting the hymns, and delivering a short message based on verses from the Bible. During her last year of teaching, Perich also led her fourth graders in a brief devotional exercise each morning.”

Perich, in short, was genuinely engaged in the business of teaching religion. These were not her only duties, but a legitimate part of her job. This would not be true of a secretary who is assigned to lead an occasional prayer for the purposes of subverting the law.

Employee job descriptions should also include the religious grounds for limiting employment opportunities, especially if the limitations involve any categories protected by law (such as religion or sex). For example, if a church or Christian school believes that only men may hold certain positions, this criteria should be clearly stated in the job description with scriptural or ecclesiastical support.

There are also handy sections that detail how a religious school should implement procedures to protect itself when rejecting an applicant on the basis of the “lifestyle” of the student or his or her parents, how to put in place policies to ensure that students dress “in conformance with one’s biological sex,” sample documents upon which to base your church’s CYA policy, and so much more.

But, lest there be any doubt, the reasons for all this legal manipulation and sketchy loophole exploitation is really a good one.

More than that, preparing yourselves legally will give your group or institution greater freedom to continue presenting the Gospel clearly and effectively to your community — and that freedom may well make an eternal difference for lost and hurting souls all around you.

Ultimately, it’s not really about being able to discriminate with impunity (that’s just a happy side effect). Really, it’s all for the sake of the sinners. Because, without some good old-fashioned scorn and discrimination, how’s a Christian to save those “lost and hurting souls”?

June 15, 2015
A Detailed Look at the Chapel Hill Shootings and the Atheist Who Killed Three Innocent Muslims
Next Post