Over the weekend, the city of Tbilisi (in the nation of Georgia) faced deadly flooding that left at least a dozen people dead and several more unaccounted for. The city’s zoo was also severely damaged to the point where many animals escaped and were seen roaming the streets. 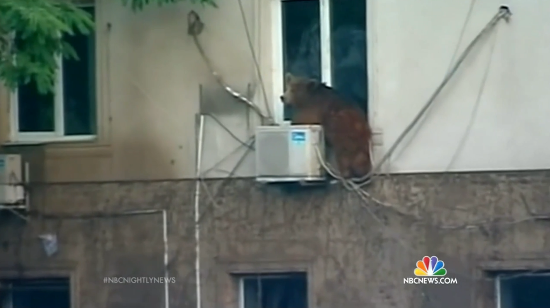 Footage from Tbilisi showed a hippopotamus roaming the streets, while a bear could be seen climbing around an apartment window. The hippo was cornered in one of the city’s main squares and subdued with a tranquilizer gun, the zoo said.

Six wolves were shot dead in a yard at an infectious diseases hospital, while NBC News viewed images of a dead lion, hyena, and a wolf — all presumably drowned in the floods.

Just horrific all around.

But at least we know why this all happened: God.

At a Sunday Mass, Patriarch Ilia II, the head of the Georgian Orthodox Church, told worshipers that the broad assault against the church by the country’s former Communist rulers lay at the root of the disaster.

“When Communists came to us in this country, they ordered that all crosses and bells of the churches be melted down and the money used to build the zoo,” the patriarch said, Interfax reported. “Therefore, the zoo should have not been built there,” he said. “Many didn’t know this, but sin will not go without punishment.”

I don’t know if that story is true. I can’t find any citations that say the zoo was built with money from the sold-off parts of local churches.

But let’s suppose it’s true. Considering the zoo was built in 1927, that means God has been waiting 88 years to finally get his revenge… and he did it by flooding the city, killing innocent victims, and causing $20 million in damages.

Now, to be fair, that *totally* sounds like something God would do… but that’s gotta be the most irrational long game I’ve ever heard about.