Did Albert Einstein Believe in God or Not? June 14, 2015 Hemant Mehta

Did Albert Einstein Believe in God or Not?

You may have heard that a collection of letters written by Albert Einstein was sold at auction on Thursday for $420,000.

The contents of those letters include advice to his son, words of consolation to a friend whose husband cheated on her, and adjustments to certain math equations. But much of the focus in the media has been on what he said about God. 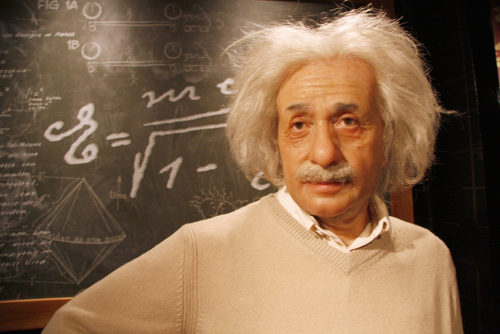 The headline at the conservative Washington Times, for example, reads:

Albert Einstein was no atheist; 27 letters up for auction show ‘he believed in God’

No, of course not.

That’s just right-wing spin. And it’s misleading as hell because that very article actually says this:

“We all know about what he accomplished, how he changed the world with the theory of relativity. But these letters show the other side of the story — how he advised his children, how he believed in God,” said Joseph Maddalena, founder of Profiles in History, The Associated Press reported.

(That’s a textbook example of taking something out of context to suit your needs.)

So what did Einstein have to say in his letters about God?

“I have repeatedly said that in my opinion the idea of a personal God is a childlike one,” he wrote to a man who corresponded with him on the subject twice in the 1940s. “You may call me an agnostic, but I do not share the crusading spirit of the professional atheist. … I prefer an attitude of humility corresponding to the weakness of our intellectual understanding of nature and of our own being.”

So… if Einstein lived today, he’d say he’s not a “New Atheist.” He wouldn’t be trying to convince you to shed your faith. Instead, he’d follow the Neil deGrasse Tyson approach to religion, which is to say he’d stay away from labels… but even he’d admit the idea of a Christian God who listens to your prayers and watches over your life is just flat-out ridiculous.

That said, Einstein really loved criticizing hard-lined atheists (despite sharing many of their beliefs, if you will). Biographer Walter Isaacson shared another letter Einstein wrote ripping on the Christopher Hitchenses of his day:

“The fanatical atheists are like slaves who are still feeling the weight of their chains which they have thrown off after hard struggle. They are creatures who — in their grudge against the traditional religion as the ‘opium of the masses’ — cannot hear the music of the spheres.”

There’s a reverence for nature (not unlike what Stephen Hawking has said in the past) and a dismissal of certain kinds of atheists. But nothing that suggests Einstein would be a worshiping Christian today.

Do you want more?

In a book titled Albert Einstein, the Human Side: New Glimpses from His Archives by Helen Dukas and Banesh Hoffman, the authors quoted another letter Einstein wrote in 1954:

… It was, of course, a lie what you read about my religious convictions, a lie which is being systematically repeated. I do not believe in a personal God and I have never denied this but have expressed it clearly. If something is in me which can be called religious then it is the unbounded admiration for the structure of the world so far as our science can reveal it.

How much more evidence do you need?

Einstein’s religion, if you have to put a label to it, is a sort of nebulous Deism: Maybe God played in role in creating the universe — because nature inspires such awe and the universe seems perfectly guided by mathematics — but that God has no direct affect on our lives today.

So don’t believe the reports that suggest Einstein wasn’t an atheist. He may have dismissed the word, but it’s not like he spent any time praying or thinking about God.

If pollsters spoke with him today, they’d categorize him as a “None,” someone who wastes no energy on religion but also has no desire to become an atheist advocate.

June 14, 2015
A Primer on Christian Legal Defense Groups
Next Post