Church-Owned Building in Atlanta Had No Air Conditioning for Weeks, Leaving Seniors to Fend for Themselves June 14, 2015 Hemant Mehta

Church-Owned Building in Atlanta Had No Air Conditioning for Weeks, Leaving Seniors to Fend for Themselves

If you live in Atlanta in the summer, you know how hot it can get.

Now imagine you’re a senior citizen living in a building with no air conditioning. You have a real problem on your sweaty, fragile hands…

What makes this particular situation even worse is that Friendship Towers, the building without the air conditioners, is owned by Friendship Baptist Church. Church leaders don’t seem to give a damn about these residents, taking their sweet time fixing the mess they created. 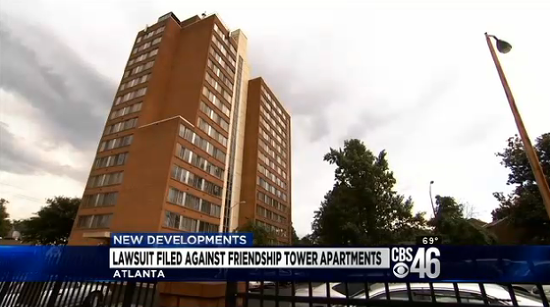 I have a hard time believing the problem is the cost, considering the church received nearly $20 million in 2013 to change location so that a new stadium could be built for the Atlanta Falcons…

Residents of the HUD-subsidized apartments say they don’t understand why management representatives are telling them they can’t get the air conditioning fixed for another three weeks.

“For us to wait until June 3, that’s too much,” resident Sharon Bridges said.

She said she’s been pouring sweat all day and that since the air conditioning unit broke in the building, the temperature in her apartment has reached as high as 96 degrees Fahrenheit.

That passage is from an article written last month. Because the church wasn’t acting quickly, a lawsuit was filed against them.

There are finally some air conditioning units in the building, but it all makes you wonder why the church leaders — of all people — had to be forced by the government to do the right thing.

“The residents were having trouble with fecal matter backing up into their tub,” [Attorney Shawn] McCullers says.

This is the same church, by the way, which describes itself this way:

A church full of the Spirit of Christ, attracting all people and striving to expand to serve the needs in our church and the broader community.

… unless you’re a senior living in a dangerously-hot church-owned building. You don’t count.

So much for the church’s moral authority…

June 14, 2015 Egyptian "Council of Churches" Will Hold Meeting This Week to Discuss How to Combat Atheism
"I was going to get a picture of him and draw a di⁮ck hole on ..."
Holytape MAGA Cultist: Republicans Who Lose Close ..."
"Thanks for bringing up their platform. It's...a whole new level of crazy. Instead of merely ..."
Dmar3 Texans Will Vote on Whether Churches ..."
"Don't look a gift horse without sauce for the gander."
Joe King MAGA Cultist: Republicans Who Lose Close ..."
"Sounds to me like they were playing to the Goobers in the crowd, cuz votes ..."
SltryPrNstyBrtsh&Shrt Pseudo-Historian Tim Barton Falsely Claims Constitution ..."
Browse Our Archives
What Are Your Thoughts?leave a comment