In 2012, the University of Toledo posted a video on its YouTube channel featuring an “all-access” look at the football team’s pre-game festivities. At one point you can see Head Coach Matt Campbell leading a prayer with the team members: 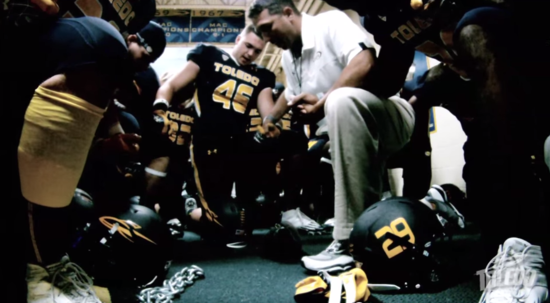 This only became an issue recently, when an alumnus of the school contacted the Freedom From Religion Foundation about the problem. Because Campbell was still the coach, there was every reason to believe the prayers were still happening. So FFRF sent university President Dr. Sharon L. Gaber a letter asking her to put a stop to this practice and assuring everyone it’s no longer happening.

Students are welcome to pray on their own, of course, but a public school coach can’t lead them in it. It’s a form of coercion and students may feel obligated to participate lest they lose playing time (or even their scholarships).

Campbell, the coach, has finally responded to the allegations… with an awkwardly-worded statement:

In the statement, Mr. Campbell did not explicitly say the team will not pray any longer, but that players will prepare for games of their own volition.

“To ensure UT football continues to bring people together, players will determine on their own any personal preparation methods to help them mentally prepare to play the game we love,” Campbell said in the statement.

Interim UT president Dr. Nagi Naganathan released a separate statement in which he did not mention prayer at all, but expressed the school’s complete satisfaction with Campbell’s job as head coach.

So no more coach-led prayer… I think.

At the very least, Campbell is now aware people are watching what he does. He has to know a lawsuit is going to be filed if he pushes his faith on the team. Hopefully, that’ll keep him from violating the law in the future.

June 13, 2015 Lawyer for School District Accused of Endorsing Christianity Fails to Show Up at Mandatory Court Hearing
Browse Our Archives
What Are Your Thoughts?leave a comment