Normally, when we hear stories about a college coach who forces athletes to participate in religious ceremonies, they involve atheist students.

According to a federal lawsuit filed this week, Natalia Mendieta received a full scholarship to play volleyball for DSU in 2012. Even though she had other similar offers, she was excited to start playing in Delaware. As long as she contributed to the team and remained academically eligible, it was assumed she would continue receiving her scholarship. 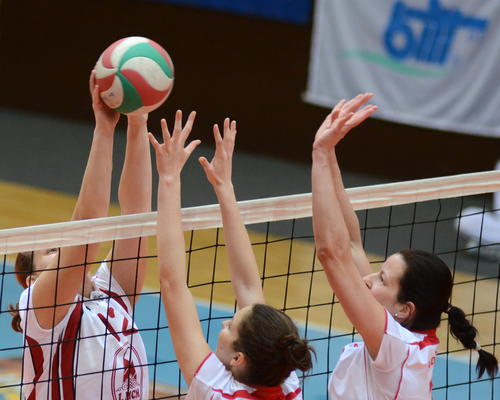 At the end of her first year, the team got a new head coach, LaKisya Killingsworth, who immediately made sure the players knew who’s boss:

Shortly after assuming her duties as head coach, Coach Killingsworth met with the entire team and told them that every player would be on “a one-year trial period” with her. On information and belief, she intended this to mean that she would dismiss players with whom she was dissatisfied.

A little scary… but as long as you continue helping the team, there should be no problem, right?

That fall, however, Killingsworth began incorporating her Pentecostal Christian faith into the team’s activities:

Throughout the preseason, Coach Killingsworth required the entire volleyball team, including… Ms. Mendieta, to attend church services with her on Sundays at Calvary Assembly of God (“Calvary”) in Dover, Delaware.

That’s where things got weird. Mendieta, who’s Roman Catholic, felt very uncomfortable by all this. She didn’t want to go to a church outside her faith. And why was religion part of the team’s schedule, anyway?

But it didn’t seem like there was a way out if you wanted to remain on the coach’s good side:

Ms. Mendieta understood that the Coach would view players who did not attend church unfavorably. Ms. Mendieta believed that her relationship Coach Killingsworth would suffer if she refused to attend the coach’s church, and if it did, she would receive less playing time and her scholarship might not be renewed for the following year.

So Mendieta went along with it. She went to the Pentecostal church. She even prayed with her coach before matches. She didn’t say anything when Killingsworth gave Bibles to the team members and encouraged them to join Fellowship of Christian Athletes.

During this whole time, Mendieta was a phenomenal player:

She appeared as a starter in all 24 matches and played exceptionally well, setting several team and conference season records. She was the team leader in service aces and ranked 25th in the entire nation for service aces per set.

During the second semester of Mendieta’s second year on the team, in March of 2014, she finally told Killingsworth she didn’t feel comfortable with the faith-based approach on the team:

… Ms Mendieta sent a letter to Coach Killingsworth… in which she outlined her concerns regarding obligatory church attendance and explained why she no longer wished to attend Calvary on Sundays.

Another student, who had raised a similar complaint, quit the team before the season started. And Mendieta knew that the coach was looking for any reason to kick her off, too.

When Mendieta and some of her teammates “missed curfew by a few minutes” the night before an away game, Killingsworth gave her an ultimatum:

On the bus ride back to DSU, Coach Killingsworth confronted Ms. Mendieta about missing curfew and screamed “I only kept you out of necessity. If you don’t play well the last game you’re gone.”

In December of 2014, on the first day of finals week, Ms. Mendieta was informed that her athletic scholarship was not being renewed for the 2015-2016 school year.

Of the students who missed the curfew, only Mendieta didn’t have her scholarship renewed. (She appealed the decision, but the school sided with the coach.) That leaves her with at least one more year of school with no knowledge of how she’ll pay for it.

Mendieta believes her objection to Killingworth’s injection of faith where it didn’t belong is the primary reason she was kicked off the team. The lawsuit lists the coach, (former) athletic director Candy Young (who approved the decision to rescind Mendieta’s scholarship), and DSU as defendants in this case. Mendieta is asking for compensatory and punitive damages, legal fees, and for DSU to “provide proper training to its employees so that similar constitutional violations are avoided in the future.”

Obviously, this is only one side of the story — DSU didn’t offer any comment — but if the allegations are true, it’s hard to see how anyone could defend all this religion making its way onto the team. The coach had no business asking players to attend church, giving them Bibles, telling them to join FCA, or praying before matches. And that’s before we even get into the punishments for students who didn’t want to participate.

It’s worth stressing that Mendieta isn’t an atheist. She’s a Christian herself. But even she didn’t feel comfortable with a coach pushing her (different form of) Christianity on the team.

Her lawyer is requesting a jury trial.

(Image via muzsy / Shutterstock.com. Thanks to Randy for the link)

June 13, 2015
New TV Show Will Highlight Modern-Day Miracles... (Because Trying to Explain Them Would Require Thought)
Next Post

June 13, 2015 State Officials in North Carolina Can Now Use Religion as an Excuse to Get Out of Conducting Gay Weddings
Browse Our Archives
What Are Your Thoughts?leave a comment