California State Assembly member Shannon Grove (below) knows exactly why her state is in the middle of a severe drought, and she explained her theory last week at a banquet sponsored by the California ProLife Council. 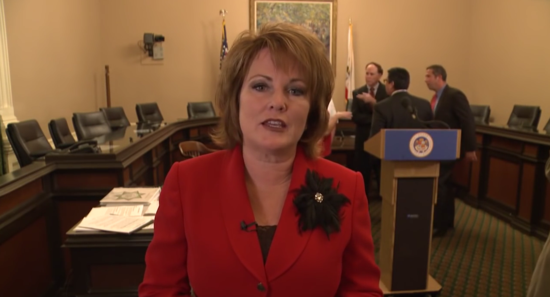 According to RH Reality Check’s Zoe Greenberg, the drought has everything to do with abortion.

“Texas was in a long period of drought until Governor Perry signed the fetal pain bill,” [Grove] told the audience, presumably referring to HB 2, the omnibus Texas abortion bill that included a 20-week ban based on junk science. “It rained that night. Now God has His hold on California.”

So Texas was in a drought until Gov. Rick Perry signed a bill that would, among other things, ban abortions after 20 weeks. (It’s the bill Sen. Wendy Davis famously filibustered, though her protest wasn’t enough.)

If only California would ban abortions, it would rain there!

Except it did rain in California. Last week. A lot.

A local news reporter asked pro-life advocate Rosalyn Strode what she thought of Grove’s comments and even she couldn’t take them seriously:

“I can understand [Grove] having a strong stand on what she believes, but it rained last (Wednesday) night, it poured. I don’t see how you connect that.“

Grove’s communication director wouldn’t say if the quote is accurate, but sent us Grove’s response saying, “I believe — and most Americans believe — that God’s hand is in the affairs of man, and certainly was in the formation of this country. The Founders put God in the center of this nation by recognizing Him as a giver of our rights. Is this drought caused by God? Nobody knows. But biblical history shows a consequence to man’s actions; we do know for sure that California’s water shortage crisis has been compounded by liberal politicians’ poor decisions — not properly managing our water resources and refusing to build water storage for decades.”

That made no sense at all.

Did God cause the drought? We don’t know! But maybe! It’s also the fault of liberals! Liberals and God!

If you’re wondering, here’s a better explanation for why the drought exists. Somehow, women’s rights is nowhere in that article.

(Image via YouTube. Thanks to Cyndi for the link)

June 12, 2015 Franklin Graham: I'm Not a Hypocrite for Taking My Money to a Gay-Friendly Bank
Browse Our Archives
What Are Your Thoughts?leave a comment