Justin Burnett (below) was elected to a seat on the Springfield (Missouri) City Council in April and he’s already a true politician, doing nothing to help the people he represents but making sure he’s scoring points for Jesus: 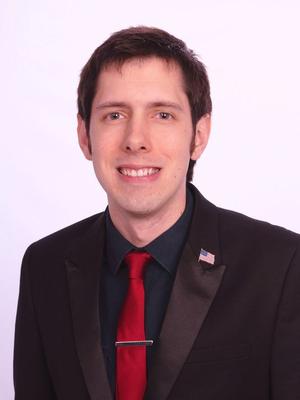 I have introduced a resolution in Springfield City Council to codify the words “In God We Trust” locally by displaying them in city hall. This bill should appear on the June 22nd agenda…

… So far, to my knowledge, this resolution has been passed in other cities through bi-partisan and unanimous support. Regardless of ideological disagreements, we can come together and preserve the ties that bind us.

You should read the comments on his Facebook post criticizing him for ignoring the ideologies of those who aren’t Christian and who want him to do some actual work.

Then, just to dig that hole even deeper, Burnett said something even dumber:

Others commented specifically about keeping religion out of city government. Burnett responded by referring to a U.S. Appeals decision that says “In God We Trust,” as the national motto, has “nothing whatsoever to do with the establishment of religion,” but that its use is “of patriotic and ceremonial character.”

Yeah! Saying we trust God has nothing to do with religion! I don’t know where anyone would ever get that idea like that…

It won’t surprise you at all that Burnett was brought up using the Accelerated Christian Education (ACE) curriculum, the same warped textbooks that brought you the Slam Poetry Girl.

Make no mistake about it: He’s doing this to push his faith on everyone else. He’ll lie and say it’s all about patriotism — just like Jesus wants him to — and he may very well get away with it on those grounds. The “It’s our Motto!” rule is one that atheists haven’t successfully fought in court.

But what’d you expect from a politician who acts like his Christianity is his biggest qualification for public office? Getting God into government is the only accomplishment that matters for people like him.

(Thanks to Jonny for the link)

June 11, 2015 Westboro Baptist Church Promised to Picket a Wizard Wedding, but They Were No-Shows When It Happened
Browse Our Archives
What Are Your Thoughts?leave a comment