Ken Ham: Belief in God is the Only Thing Preventing Miley Cyrus from Committing Pedophilia or Bestiality June 11, 2015 Rachel Ford

Ken Ham: Belief in God is the Only Thing Preventing Miley Cyrus from Committing Pedophilia or Bestiality

Creationist Ken Ham took to his blog yesterday to discuss Miley Cyrus‘ nude photo shoot and accompanying interview in Paper magazine (the same publication that “broke the Internet” with its provocative pictures of Kim Kardashian). 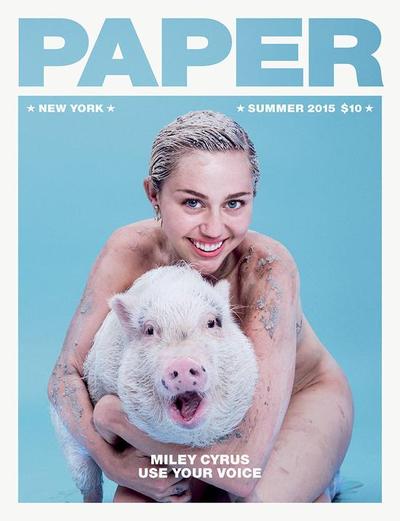 Ham’s thoughts are certainly worth reading — not because he makes sense, but because they offer more insight into his own views of the world.

After some pearl-clutching about Cyrus “shak[ing] her fist at God and promot[ing] sexual perversion,” Ham kindly explains the Creationist version of why-humans-wear-clothes (spoiler: it involves sin in the Garden of Eden).

Then he gets to the interview itself:

Now, I will not direct people to that pagan magazine by linking to it, but many news sources carried quotes from the interview she did with this magazine.

On Fox News we read (please note that this news source does display the cover of Paper magazine, which may offend some people),

The article touches on what Cyrus thinks of people who believe Noah’s Ark was a real vessel, “That’s [expletive] insane,” she told the magazine. “We’ve outgrown that fairy tale, like we’ve outgrown [expletive] Santa and the tooth fairy.”

(Ham edits Cyrus’ language more stringently than the Fox article did and bemoans the fact that the “expletive was used a number of times in the interview.” I can only hope that Answers in Genesis’ health plan covers counseling, as this degree of stress may necessitate it.)

As Ham sees it, though, Cyrus is not merely rejecting the Noah’s Ark story, but (and this is his term) the “Ark of salvation — Jesus Christ.” In turning her nose up at that “ark of salvation,” she is, in Ham’s view, rebelling against God despite Jesus’ offer of redemption.

But it gets worse. After (I’m assuming) fetching his smelling salts, Ham quotes from the Fox article again:

Sexually, Cyrus said she is “down with” anything. She views her sexuality and even her gender identity as fluid.

“I am literally open to every single thing that is consenting and doesn’t involve an animal and everyone is of age. Everything that’s legal, I’m down with. Yo, I’m down with any adult — anyone over the age of 18 who is down to love me,” she said. “I don’t relate to being boy or girl, and I don’t have to have my partner relate to boy or girl.”

In response to this declaration of her sex-positivity, Ham poses a question that seems to indicate either that his own moral understanding is very shallow (having progressed no further and having developed no deeper than the following of commands) or else very warped (that, without the specter of punishment and the promise of rewards in eternity, he sees no impetus to forgo monstrous acts).

Question for her: Why not involve an animal? On what basis does she decide that? Besides, if there’s no God and she’s just a result of evolution, then she is merely an animal anyway. And those she interacts with sexually are just animals — so why not any animals? In other words, she has decided to draw a line for some reason — but what reason? It’s actually because in her heart she knows God exists (Romans 1), she knows she is different from the animals as she is made in God’s image… and she has a conscience (as seared as it is because of her sinful rebellion) because the law is written on our hearts…

Question for her: Why only those over the age of 18? On what basis did she decide that? If there’s no God, why have any age restriction? On what basis would she argue against pedophilia? Why not do whatever anyone wants to do?

The whole line of questioning suggests that Ham believes there’s some sort of sexual attraction between non-believing adults and children or animals, an assumption that springs solely from the depths of Ham’s pious mind. Cyrus makes no secret that she is attracted to both men and women; any and all mention of attraction to children or animals, however, comes from Ken Ham, and only Ham.

More importantly, as to the moral reasons why one would not engage in acts of pedophilia or bestiality, Cyrus herself has already provided at least one answer: consent. A child cannot give informed consent, nor can a non-human animal. Pedophilia and bestiality, then, do not fit the parameters Cyrus has already identified.

So the questions were actually answered before Ham even posed them.

But that didn’t stop Ham from copious quoting of Scripture and dire warnings about the peril of rebellion against God. In his mind, all of this emphasizes the need for a Ark Park:

If a land-based reproduction of a fantasy boat doesn’t persuade Cyrus to take moral guidance from someone who thinks God-belief is the only thing stopping people from committing animal rape and pedophilia… well, I don’t know what will.