If you were to drive into Hawkins, Texas, you’ll be greeted by this 18-foot-wide sign saying “JESUS welcomes you to Hawkins”: 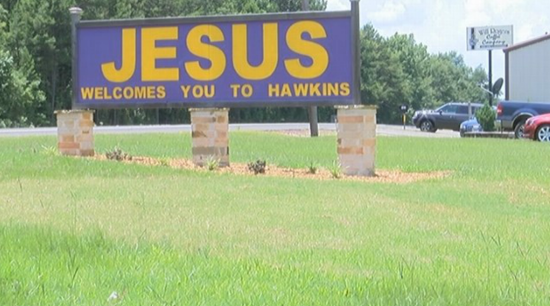 For some reason, this sign has been around since 2011, when Mayor Will Rogers requested that it be put up. But now that the Freedom From Religion Foundation is pointing out its illegality, we’re starting to hear the ridiculous arguments for why it should remain up:

Hawkins mayor Will Rogers said the city doesn’t have the money to battle FFRF in court, but he thinks it is a fight the city would win.

“That’s not a church, we’re not welcoming you to a particular church, that sign says ‘Jesus welcomes you,’” explained Rogers. “[Jesus is] the most googled and most popular man in the world.”

Given the popularity of the name Muhammad, why not just say “Muhammad welcomes you to Hawkins”?

Rogers said in response that it’s not about religion.

“To me and many others, Jesus is not a religion, Jesus is in every religion across the globe,” Rogers said. “He’s in Islam, Buddhism, Hinduism. He represents love and kindness.”

Mr. Rogers is all about love and kindness.

Jesus is all about religion. To say he’s not makes as much sense as Christians trying to argue a cross has nothing to do with their faith. It’s silly because it’s so damn obvious to any casual observer.

The Hawkins City Council says it’ll decide how to handle the sign at its next meeting.

Here’s a tip: Just hand it over it to a local church and move on to actual business.