Rick Santorum recently made some eyebrow-raising comments about how the Pope should leave science to the scientists with regards to climate change. It was strange not only because those words were coming from Rick Santorum (who is both a climate change denier and a Creationist), but also because he was criticizing Pope Francis for embracing the scientific consensus on the issue.

This incongruity did not escape Fox News host Chris Wallace, who raised the issue during an interview this past weekend with the presidential hopeful: 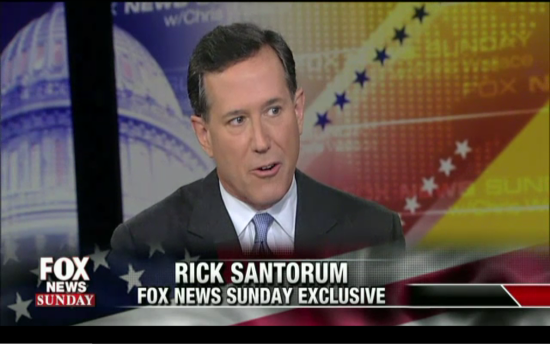 If he’s not a scientist (and, in fact, he does have a degree in chemistry), neither are you. And that’s one point. The second point is that somewhere between 80 and 90 percent of the scientists who have studied this say that humans, human activity, contributes to climate change. So, I guess the question would be, if he shouldn’t talk about it, should you?

Santorum responded by pointing out that he’s a politician and, “like it or not,” politicians have to set policy on these things.

Santorum and other climate science deniers aren’t just “setting policy” on how best to address climate change, though. Unlike the Pope, who is addressing the moral implications of established science, they’re challenging the data for purely political reasons.

Hearing this, Wallace wondered if Santorum was saying the Pope didn’t have a right to talk about this.

Santorum’s answer was perhaps his worse one yet:

… The Pope can talk about whatever he wants to talk about, I’m just saying what should the Pope use his moral authority for… I think there are more pressing problems confronting the Earth than climate change.

Maybe someone needs to remind Santorum that he’s not actually Pope. While things like the dangers of contraception or the evils of gay marriage may be more pressing issues to Santorum, at least based on how often he talks about them, Pope Francis sees the potential impact on humanity of climate change as troubling.

So while Rick Santorum might not see addressing climate change as a moral imperative, this is the position of his Church. But, frankly, it’s kind of amazing to watch a self-styled Catholic social warrior like Santorum imply that the Pope is misusing his moral authority by not sticking to the things that Rick Santorum thinks are important.

Apparently not even the Holy Father has the direct connection to God’s mind that Rick Santorum does.

June 10, 2015
Despite What Some Conservatives Are Suggesting, Patrick Stewart Isn't Jumping Ship on LGBT Rights
Next Post