Pat Robertson: If Your Baby Dies, It Might Be Because God Was Stopping the Next Hitler June 10, 2015 Rachel Ford

Pat Robertson: If Your Baby Dies, It Might Be Because God Was Stopping the Next Hitler

There are a lot of well-meaning but obtuse things you can say to a grieving person after the death of a family member. Things like “He’s in a better place now” or “God needed His special angel home early” or “Everything happens for a reason” come to mind.

But it’s almost always clear that these phrases, no matter how unhelpful and even hurtful they can be, are well-intentioned. They’re meant to provide comfort. Because that’s what we attempt to do — even if we don’t do it well — when we learn that someone has lost a loved one.

Which makes Pat Robertson‘s recent comments all the more appalling. They’re so monstrous that it seems beyond the pale for anyone to think saying them would be a good idea. 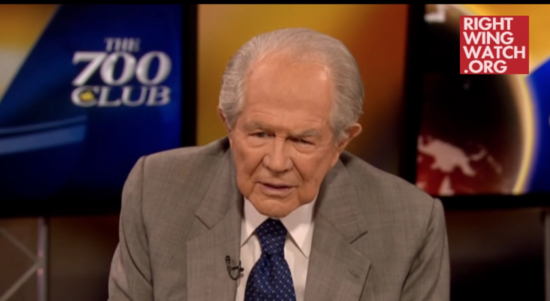 A viewer named Jane asked Robertson this question referring to her co-worker:

[The co-worker] said she can’t believe in a God who let her baby of 3 years old die — suffering a long battle in and out of hospitals — while He heals other children. She asked me, “Why did God allow my baby to die?”

Jane was taken aback by her colleague’s dilemma and told her that she didn’t know the answer, but added that “God sees the whole picture, [but] we see only in part.”

Wisely realizing the inadequacy of such an answer, she asked, “What else can I say?”

Unwisely, however, she posed this question to Pat Robertson.

Robertson suggested that God is not as active as He was in the Old Testament, and that medical malpractice often kills people. “It happens all the time,” he said.

You can’t blame God for that, he explained.

But what about when malpractice and human error aren’t factors, as appeared to be the case with the co-worker whose baby suffered after a “long battle in and out of hospitals”? Isn’t that God’s fault?

Robertson had an answer, of sorts, for that as well:

So how could God do that? How could a good God let happen? Well, the good God is going to take that baby to heaven right now, and that isn’t a bad thing.

It would be bad enough to tell a grieving parent that the death of her child “isn’t a bad thing” because he’s up in heaven with God. But to suggest that a parent should take comfort in a child’s death because God may have been stopping the next Hitler?

You’d have to work really hard to come up with something worse than that.

June 10, 2015
Franklin Graham, Who's Boycotting Pro-LGBT Companies, Moved His Money to a Gay-Pride-Supporting Bank
Next Post