Pastor Steven Anderson on Caitlyn Jenner: “I’m Gonna Pray That He Dies and Goes to Hell!”

Christian hate-group leader Pastor Steven Anderson complained about the existence of Caitlyn Jenner during a recent sermon, telling his congregation he hopes she dies… because that’s what his loving God wants. 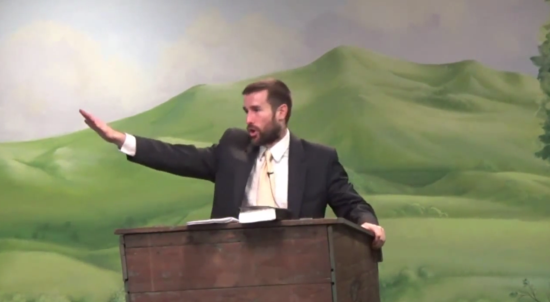 This week, this filthy sodomite picture is everywhere. People are showing this transvestite. Or transgender. Or whatever this guy is… Bruce Jenner. Has basically mutilated his body, apparently. And he’s being praised by our President! Our President Obama is praising him — or praising her. We don’t even know what it is!…

This filthy pervert is just, like, on all these magazine covers and just everywhere, just being crammed down our throats. Like hundreds of millions of people — literally, hundreds of millions of people — are being subjected to looking at a trans-freak. And this person is just the evangelist of sodomy and filth to the world. And you know what? And then people are like, oh, we need to pray for him that he finds Jesus. I’m gonna pray that he dies and goes to hell!

Anderson, who clearly does no research, gets plenty wrong here. Jenner is only on one magazine cover, no one has to look at it (much less “literally hundreds of millions of people”), and Jenner has said she’s a Christian (so no one needs to pray for that).

But that’s all secondary to the pure, unadulterated, Bible-based hate that Anderson has for Jenner. It’s hard to make the case that the Bible is all about love when someone — even a person most Christians would easily dismiss — gets his despicable talking points from the same book.

June 10, 2015
Pat Robertson: If Your Baby Dies, It Might Be Because God Was Stopping the Next Hitler
Next Post