I posted yesterday about how Franklin Graham told his Facebook followers to boycott LGBT-friendly companies:

He took his own advice, too. Upset that Wells Fargo used a gay couple in one of its ads, Graham said that the “Billy Graham Evangelistic Association [is] moving our accounts from Wells Fargo to another bank.”

Turns out that bank is North Carolina-based BB&T.

And BB&T is actually a proud supporter of the Miami Beach Gay Pride Parade: 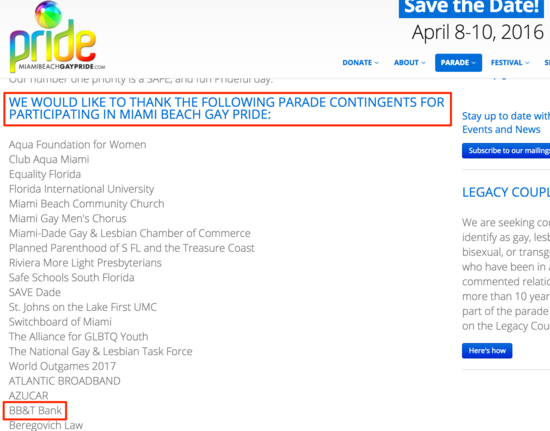 I haven’t laughed this hard in a while…

A bank spokesman said the company hopes to “support the individuals and organizations that broaden our perspectives and strengthen the diverse fabric of our communities. That’s why BB&T is proud to be a part of this day of pride and celebration of the 2015 Legacy Couples.”

So far, Graham is silent on where he plans to move his money now that the whole world’s gone gay. Maybe he can just buy a Jesus-approved private jet.

June 10, 2015 Pat Robertson: If Your Baby Dies, It Might Be Because God Was Stopping the Next Hitler
"It's good to know that they CAN prioritize, when it's vital to do so."
democommiescrazierbrother California Pastor Arrested for Alleged Sex ..."
"Yes with the cost of going to the doctor’s very high here in the US ..."
Rob P Despite Anti-Vaxxer’s COVID Death, His Pastor ..."
"I agree completely. I just wanted to make sure that I had been clear. Carry ..."
democommiescrazierbrother Despite Anti-Vaxxer’s COVID Death, His Pastor ..."
"Looks more like Bondo to me."
wreck California Pastor Arrested for Alleged Sex ..."
Browse Our Archives
What Are Your Thoughts?leave a comment